Please find enclosed our newly designed ECOLOGICAL tour “Golden Ring of Russia“ along the itinerary Moscow – Ryazan – Suzdal – Vladimir – Krutovo village – Moscow.
This tour is created with environmental friendliness and responsible tourism vision with specially chosen local eco-friendly accommodation either in boutique hotels or in farms and with using local trains everywhere when possible. We think that the general ecological mind will make our eco-tours more and more popular! The tour is available in English, German, French, Italian, Spanish.

Optional: dinner at the hotel. 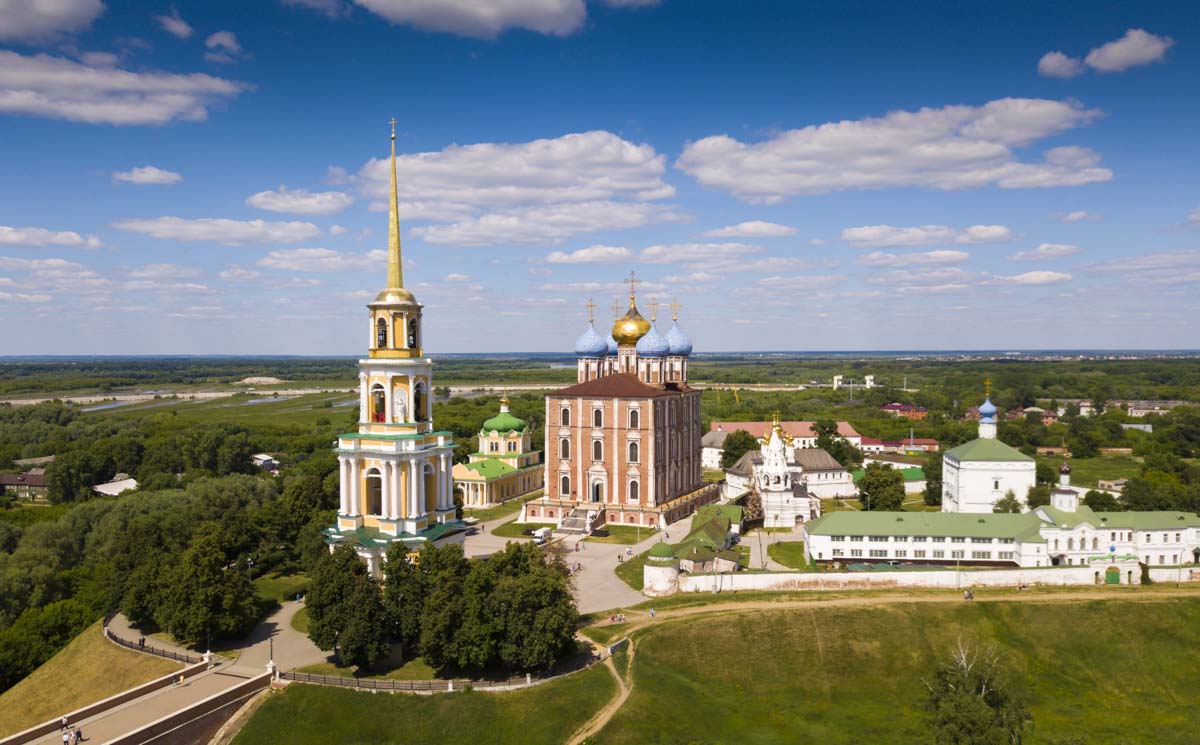 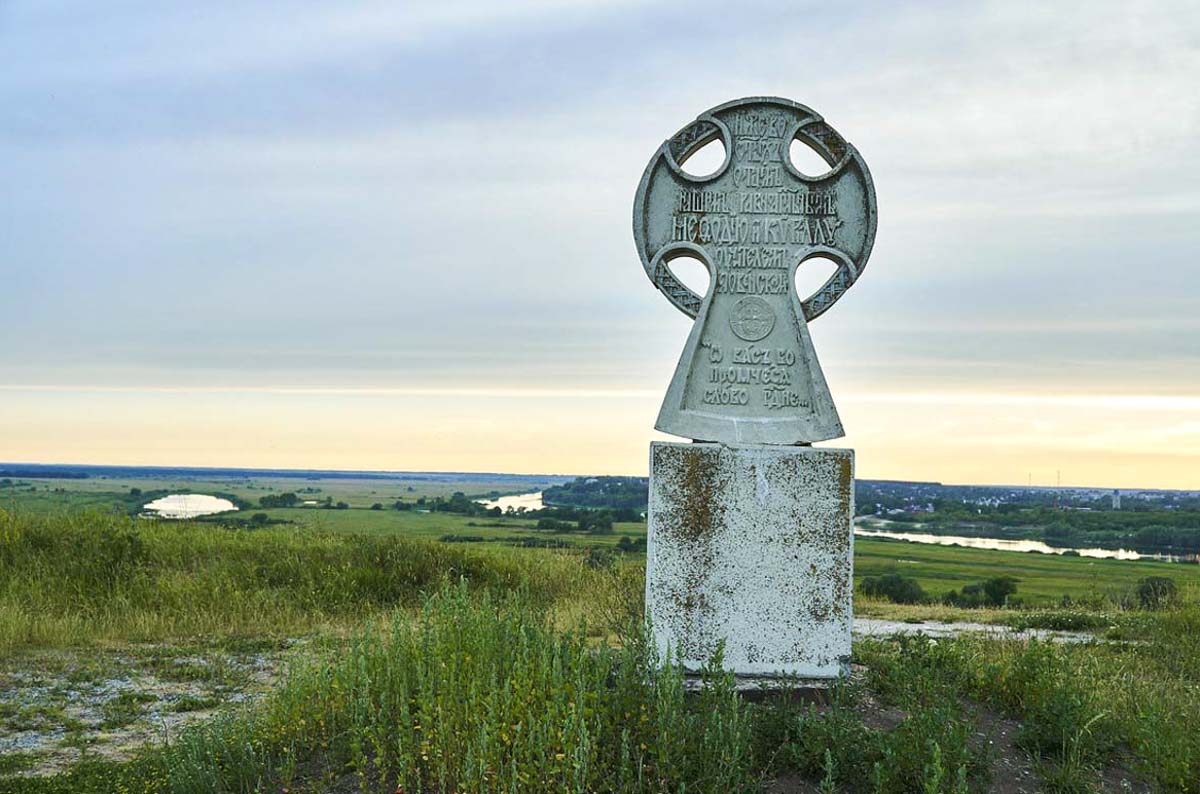 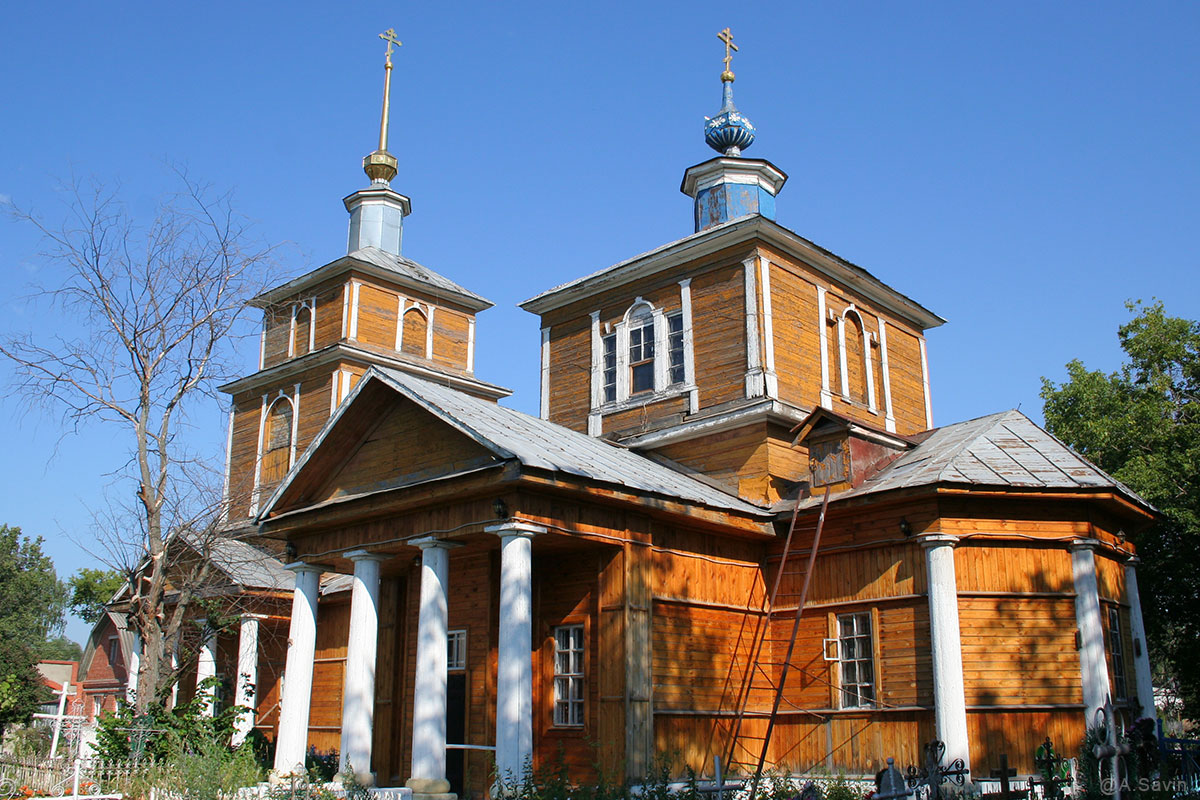 Breakfast at the hotel (or breakfast boxes), check out.

Transfer from the railway station.

Excursion to the historical and archeological reserve “Old Ryazan” in Spassky district.

The capital of the Great Ryazan principality, the largest city of Ancient Rus – today is only an archaeological settlement 50 km from Ryazan on the high bank of the Oka. To this day, only the defensive ramparts and the foundations of ancient churches overgrown with earth have survived. After Kiev, the settlement of Staraya Ryazan is in second place in terms of the wealth of treasures of gold and silver, tools and household items of the XII-XIII centuries. The finds are kept in the Ryazan Kremlin and the Armory Chamber in Moscow. Archaeologists are still working in Staraya Ryazan. And you can also see here the ruins of the Borisoglebsky Cathedral, built at the beginning of the 20th century in memory of the ancient temple and destroyed in the Soviet years. A picturesque view of the Oka opens from here. All the truly large princely capital cities have come down to us having changed their appearance, built up, and have lost their borders. Ryazan is a unique archaeological site.

Small cities of Russia, including Spassk-Ryazansky, are similar to each other like drops of water, but only in appearance. There are six towns with the name Spassk on the map of Russia, and in order to differ from the other five, in 1929 our city received the prefix Ryazansky. It is located on the left bank of the Oka River, 55 kilometers southeast of Ryazan. A tannery, a bakery, a dairy plant, a sewing and metal factory are located in Spassk.

The Oka Biosphere Reserve is the most picturesque corner of Meshchera, located in its south-eastern part. You will not find monotony in the nature of this region! Majestic forests are replaced by dead marshes-mosses; lakes with water as clear as a tear – rivers black with peat. Unique species of plants and animals are preserved in the Oka Nature Reserve, thousands of flocks of birds fly to this region every spring. These are geese, cranes, herons, various sandpipers, gulls, raksha, about a hundred species of passerine birds. The black stork, which is regularly found here, has become the emblem of the reserve. In our forests you can admire the rarest orchid Venus slipper, in floodplain reservoirs there is a relic of the tertiary period – chilim (water nut) in the mass. The famous Oka meadows beckon with a variety of colors and smells of various grasses. 61 species of mammals, 266 species of birds, 6 species of reptiles, 11 species of amphibians, 39 species of fish live and bring offspring in the forests, meadows, reservoirs of the reserve.

Transfer to the hotel in Ryazan, check in.

Breakfast at the hotel, check out.

On the banks of the Pra River, in the very center of Meshchera, there is Spas-Klepiki – the smallest town in the Ryazan Region. It has a long history: it was first mentioned in documents in 1676 as the village of Klepikovo. The name comes from the word “klepik”, which means a knife for cleaning fish. In the 19th century, after the opening of the Church of the Transfiguration of the Lord, the village was given a second name – Spasskoye, and the village acquired its current name.

Visit to the National Park “Meschersky”.

The Meschersky National Park, created in 1992, is located in the Ryazan region. Its area is 103 thousand hectares. This is one of the most popular places for outdoor recreation in the central part of Russia. Where else can you walk through the forest, listen to the singing of birds, gather mushrooms and medicinal herbs, eat berries right from the bush and admire the purest water of the famous Klepiki's lakes? In the park there are architectural monuments – churches built in the XIX and early XX centuries, as well as archaeological monuments – Tyukov gorodok, Deulinsky burial ground and others. Various ecological trails, a water tourist route, automobile routes and tourist parking lots have been created for visitors to the park. 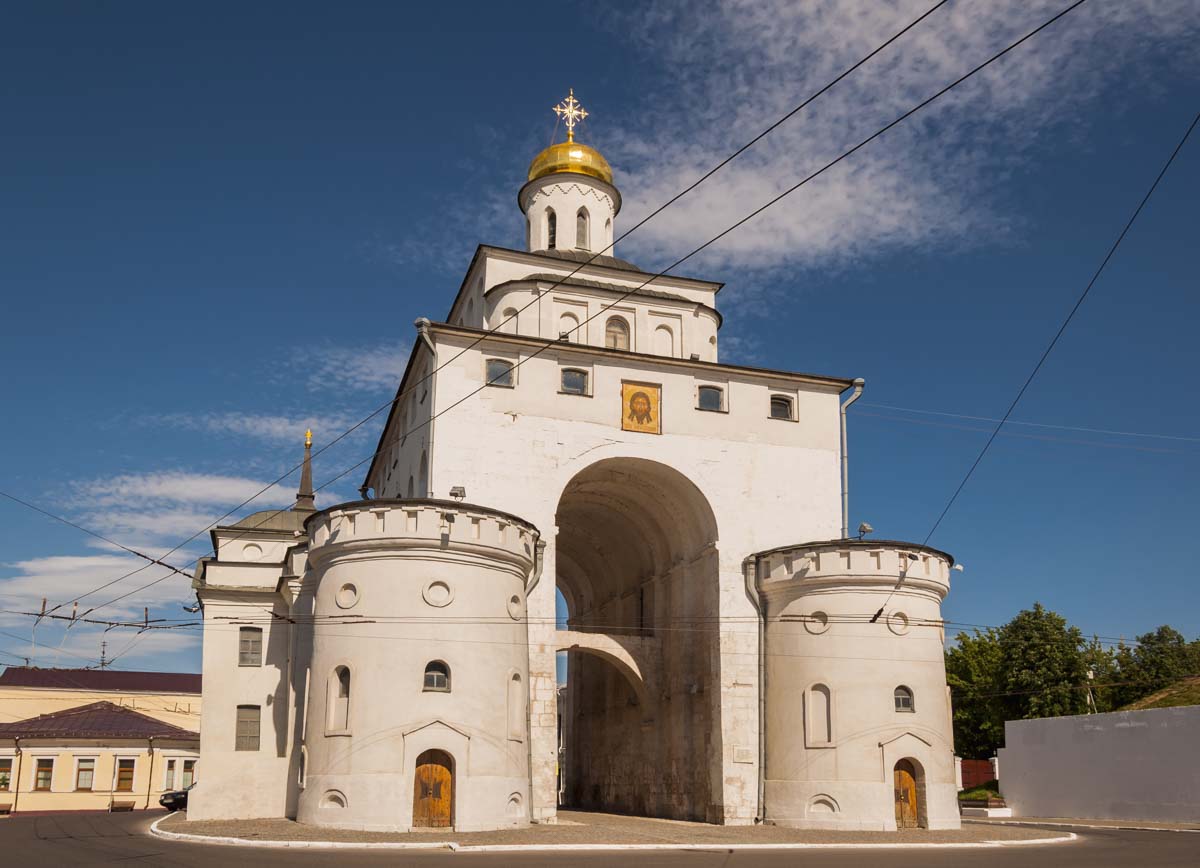 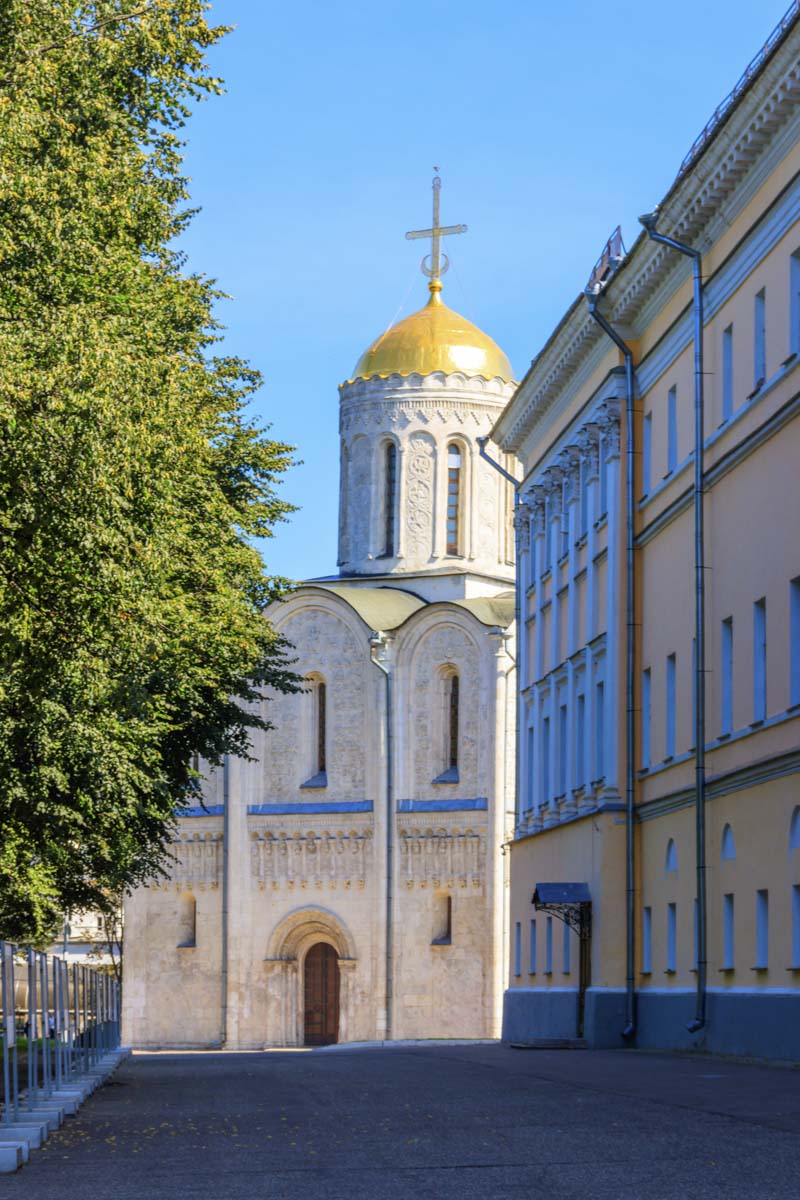 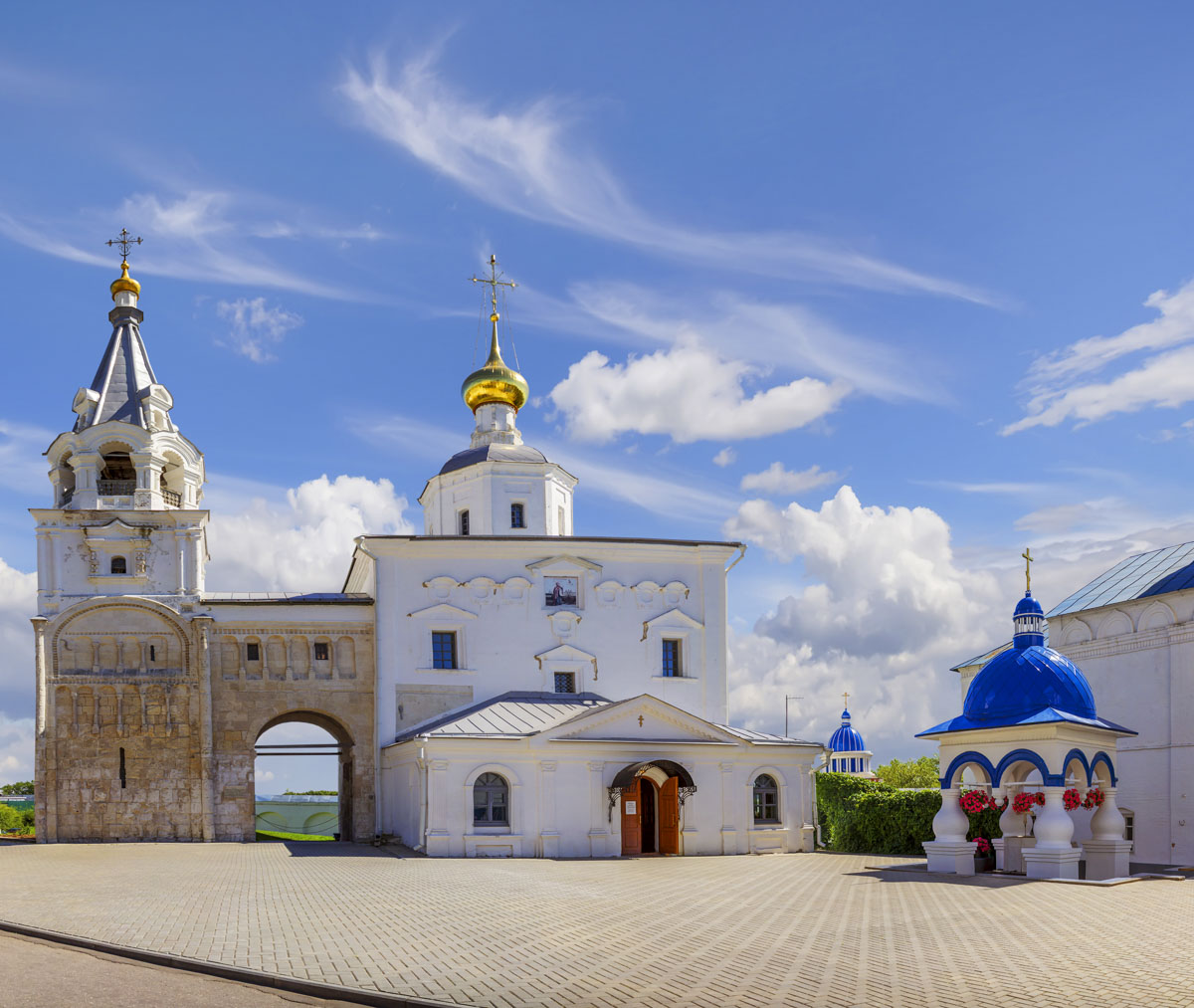 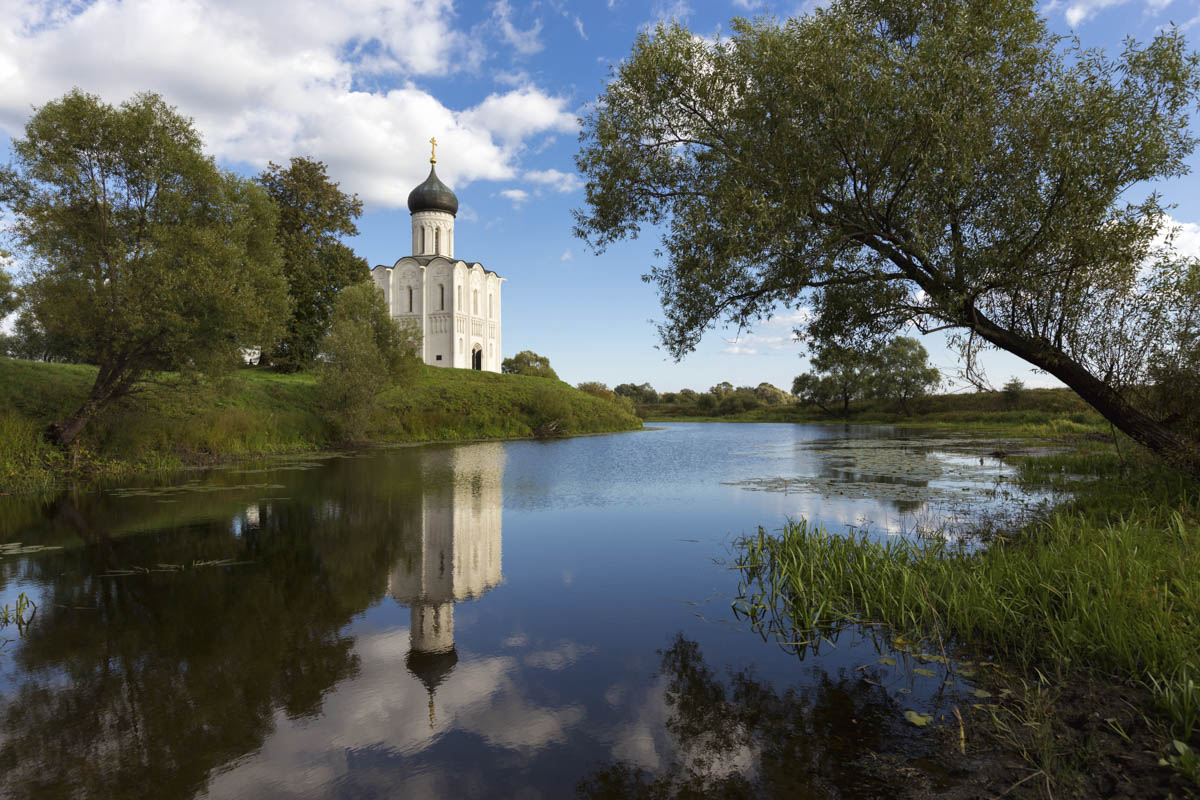 Transfer to Vladimir (~40 km). Bus city tour of Vladimir with a visit to the Assumption cathedral and Nativity monastery.

Vladimir is the old capital of north-eastern Rus’. Visit the city’s sights dating back to the 12th century: the Golden Gates, symbolizing the grandeur and power of the ancient Rus’, St. Dmitry cathedral dating back to the period prior to the country’s invasion by the Mongols, and the Assumption cathedral – the masterpiece of a white-stone architecture which boasts frescoes by Andrey Rublyov, and many other.

Visit to the castle of Grand Prince Andrey Bogolyubsky and the church of the Intercession on the Nerl in Bogolyubovo Andrey Bogolyubsky's castle is a white-stone masterpiece, the oldest building on the territory of the Holy Bogolyubsky monastery, built on the site of the former princely residence in 1158. It contains a unique relic-the icon of the Mother of God, considered the first written image of the virgin Mary in Russia. White stone temple on a green hill. The Church of the Intercession on the Nerl, near Vladimir – is one of the most famous monuments of ancient Russian architecture. This miracle, preserved from the XII century, is also called the Swan-temple.

Return to the hotel in Suzdal.

Dinner at the local café/hotel. 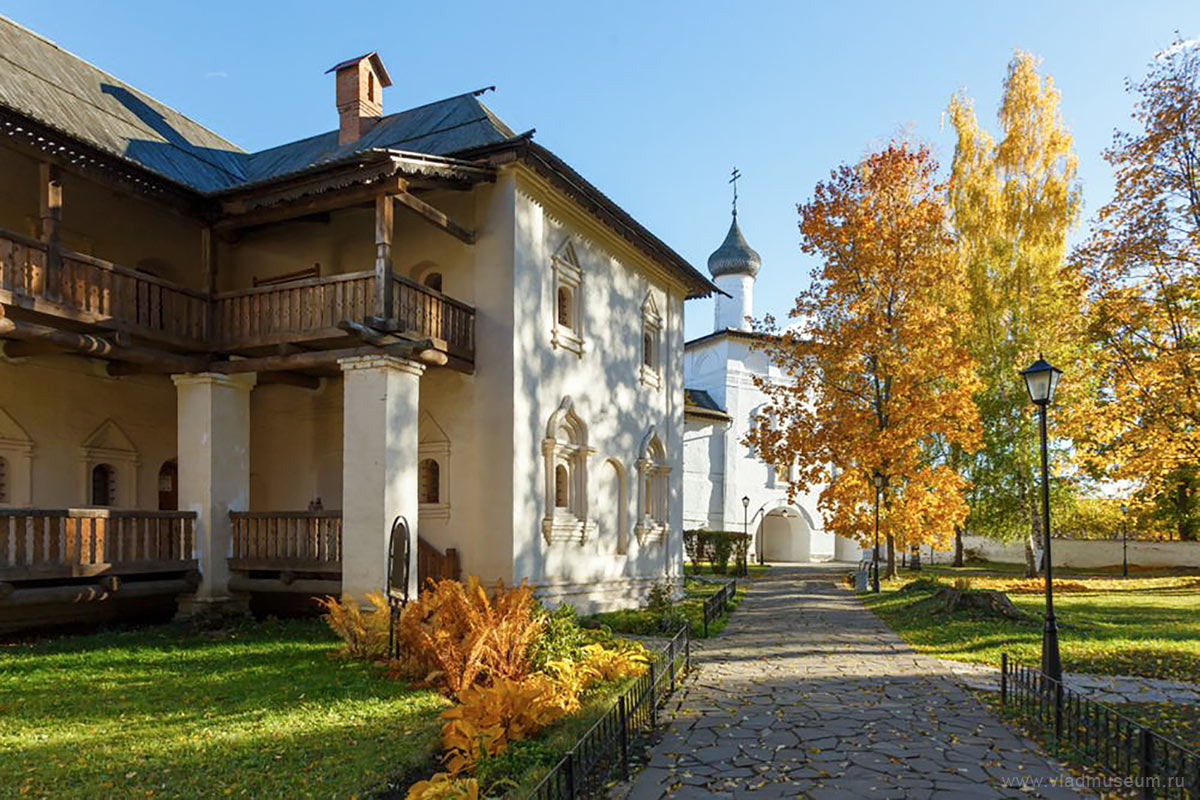 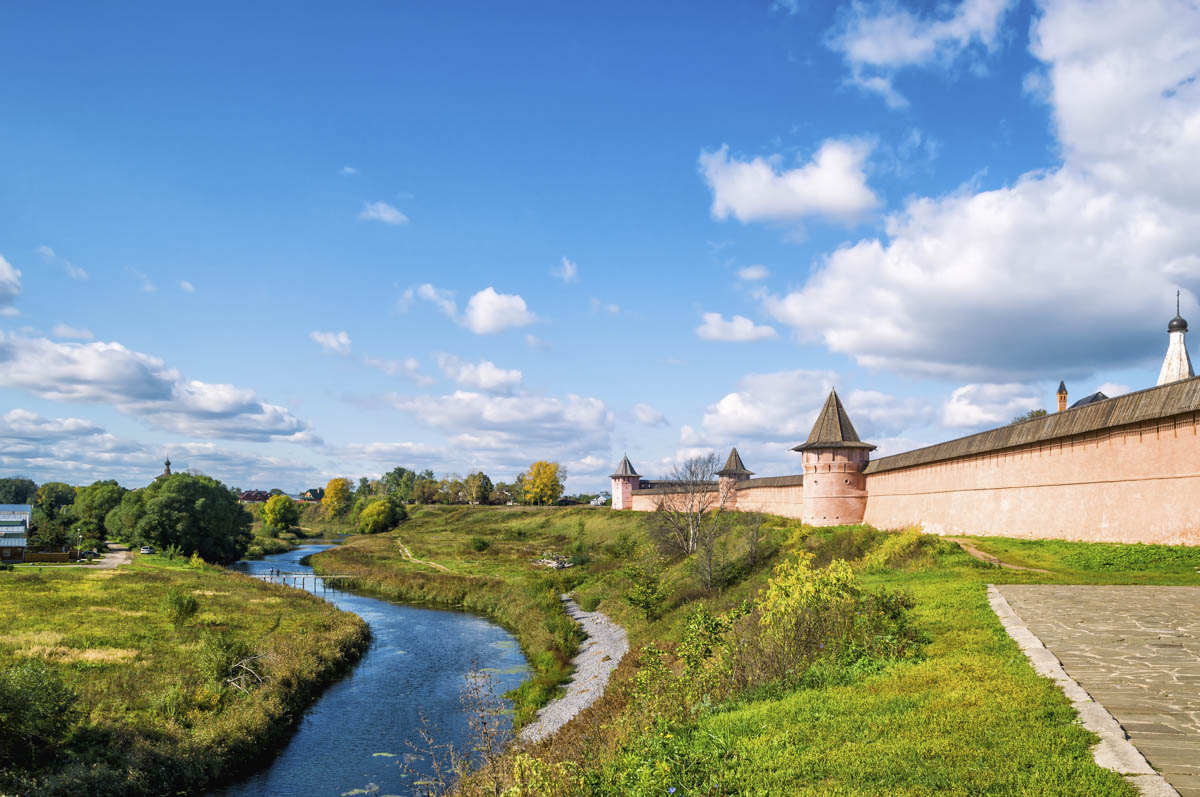 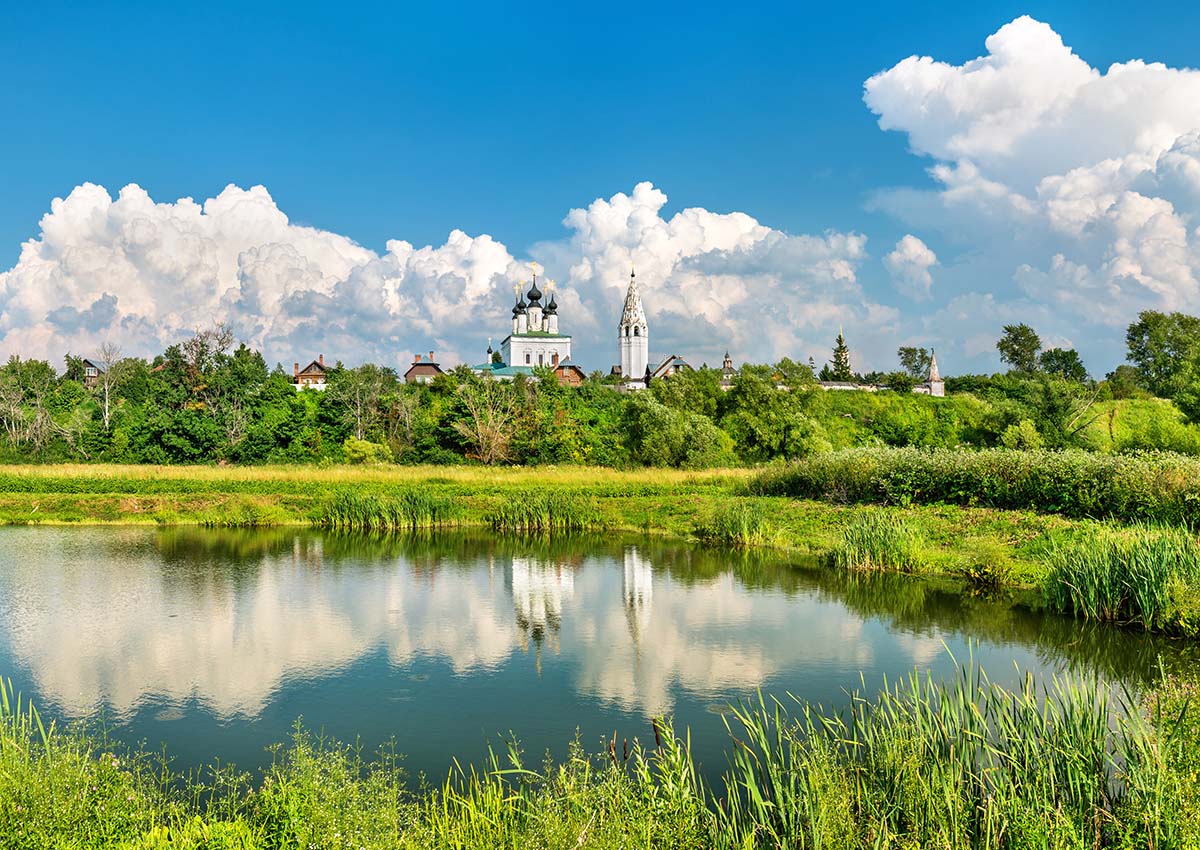 Meeting with a guide at the hotel lobby Sightseeing tour of Suzdal.

In Suzdal everything is like on a postcard. People come here to immerse themselves in the atmosphere of an old Russian city, ideally blended with the classic Russian landscape with vast fields, river bends and hills. Suzdal counting more than 200 historical monuments, many of which are UNESCO Heritage sites. Visit Trading Rows and the Trading square, the Suzdal Kremlin, the Savior monastery of St. Euthymius and listen to the concert of church bell music, visit the museum of wooden architecture with the buildings of the 17-19th century, enjoy the panorama of the city from the observation platform Ilyinsky lug. 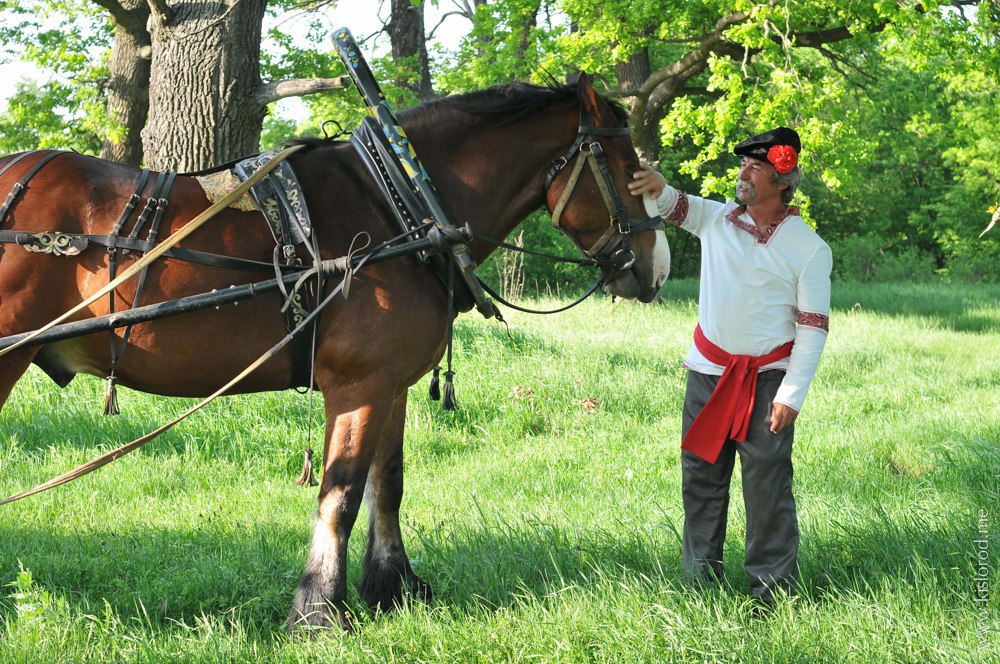 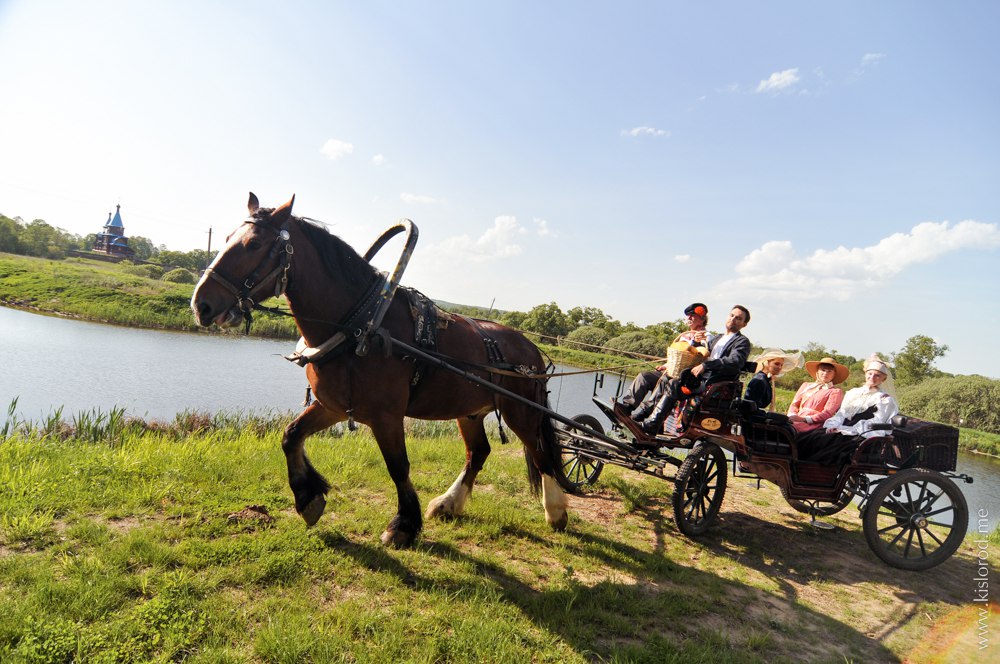 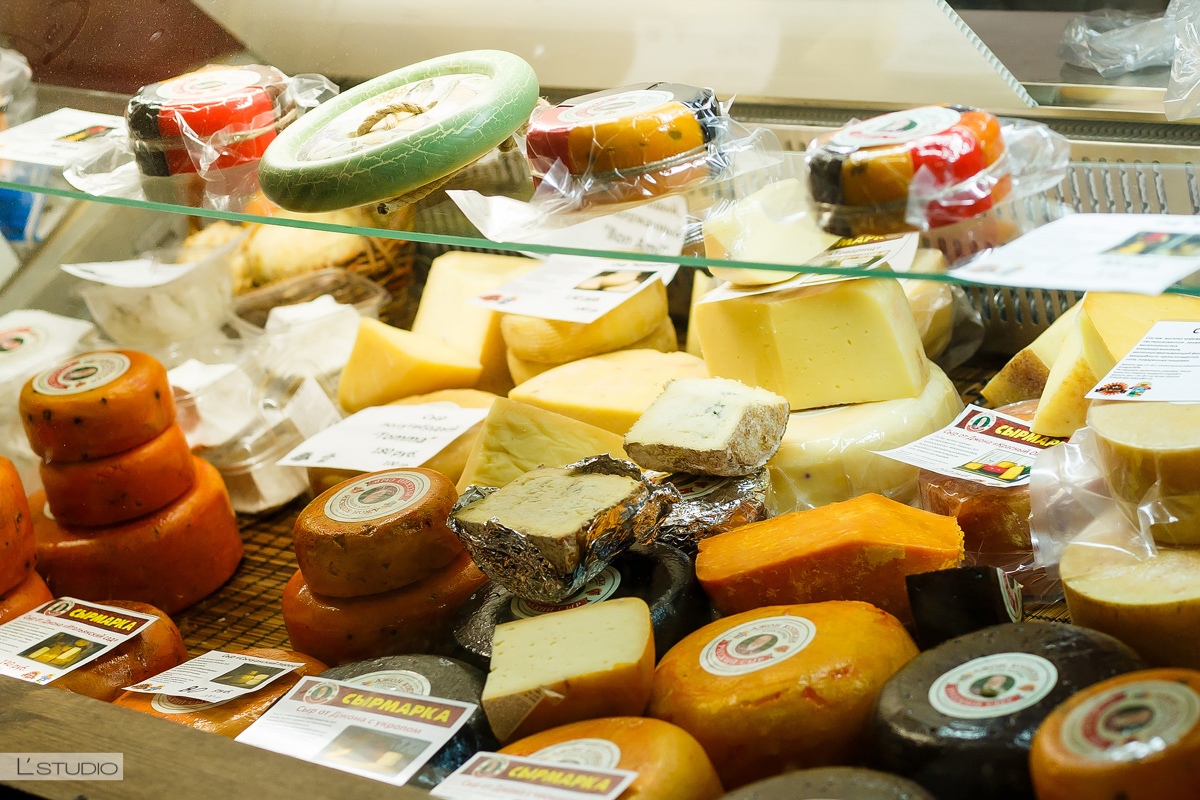 Breakfast at the hotel (or breakfast boxes), check out.

Transfer to the railway station in Vladimir.

Meeting guests in the Russian tradition with a glass of vodka, a snack and musical accompaniment.

Excursion on the territory of one of the leading agro-tourist complexes of Central Russia.

The place of the revival of Russian culture and everyday life – this is how the Bogdarnya complex can be described. When guests come here, they become part of collective farm life, but not the one that is presented in standard stereotypes, but the real one – Russian, where nature, openness and love for the land are combined into a single whole. Today Bogdarnya is one of the largest producers of premium natural products, a center for the development of equestrian sports in the Vladimir region, an object of revival and maintenance of Russian traditions. The time spent in the Bogdarnya complex is guaranteed to be full of many activities. You will have to look into the stable and the farm yard with pets, you will climb the tower, admire our pride-the crater garden, take dozens of photos in picturesque places and learn how to spend more interesting time in the complex.

Visit to the cheese factory with cheese tasting.

Cheese! This is something without which it is already difficult to imagine the Bogdarnya complex. Here they cook cheese from their own milk and constantly experiment with new recipes. We invite you to see how it is done and try the product of daily labor.

Lunch on the farm with the freshest farm products.

Check in. Free time on farm. 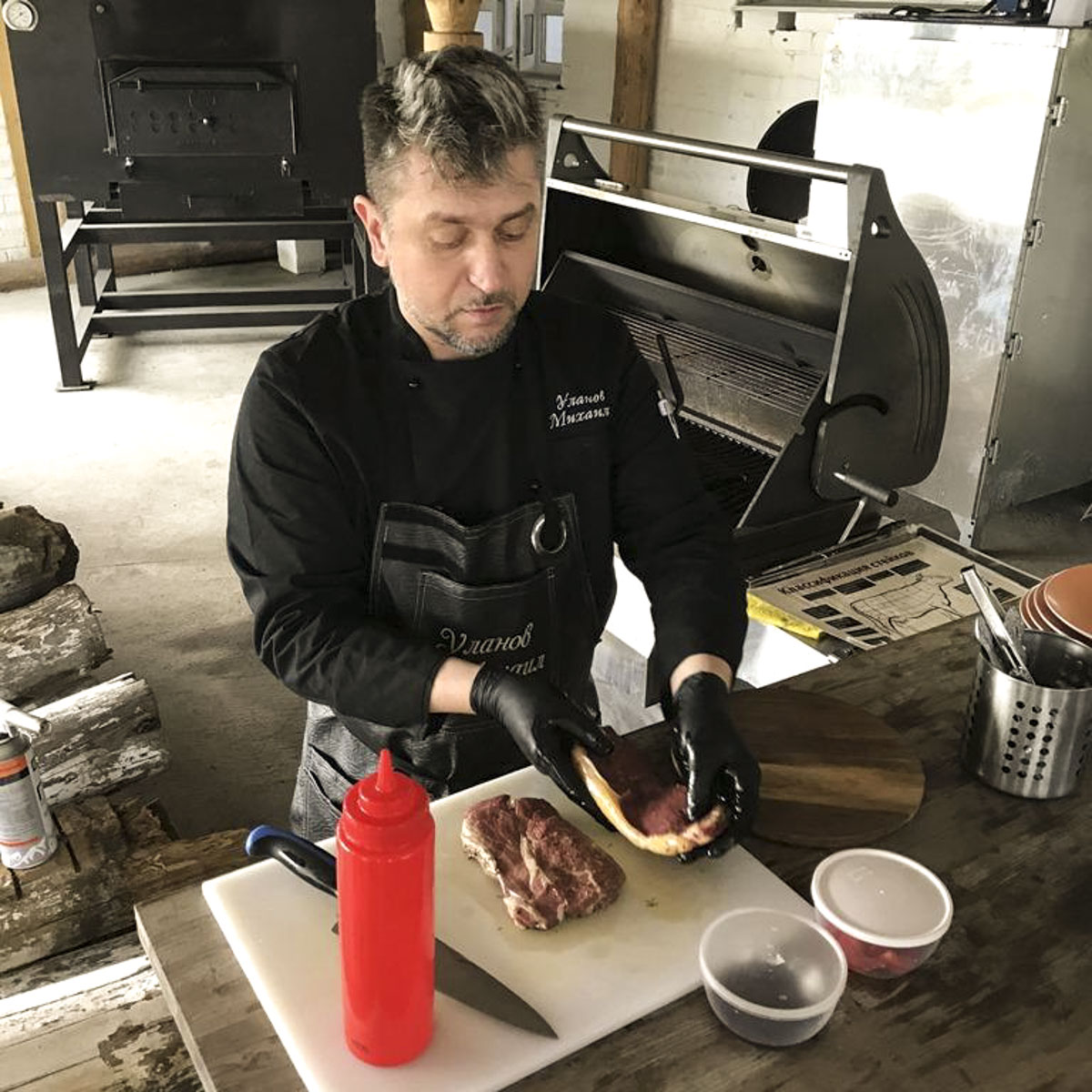 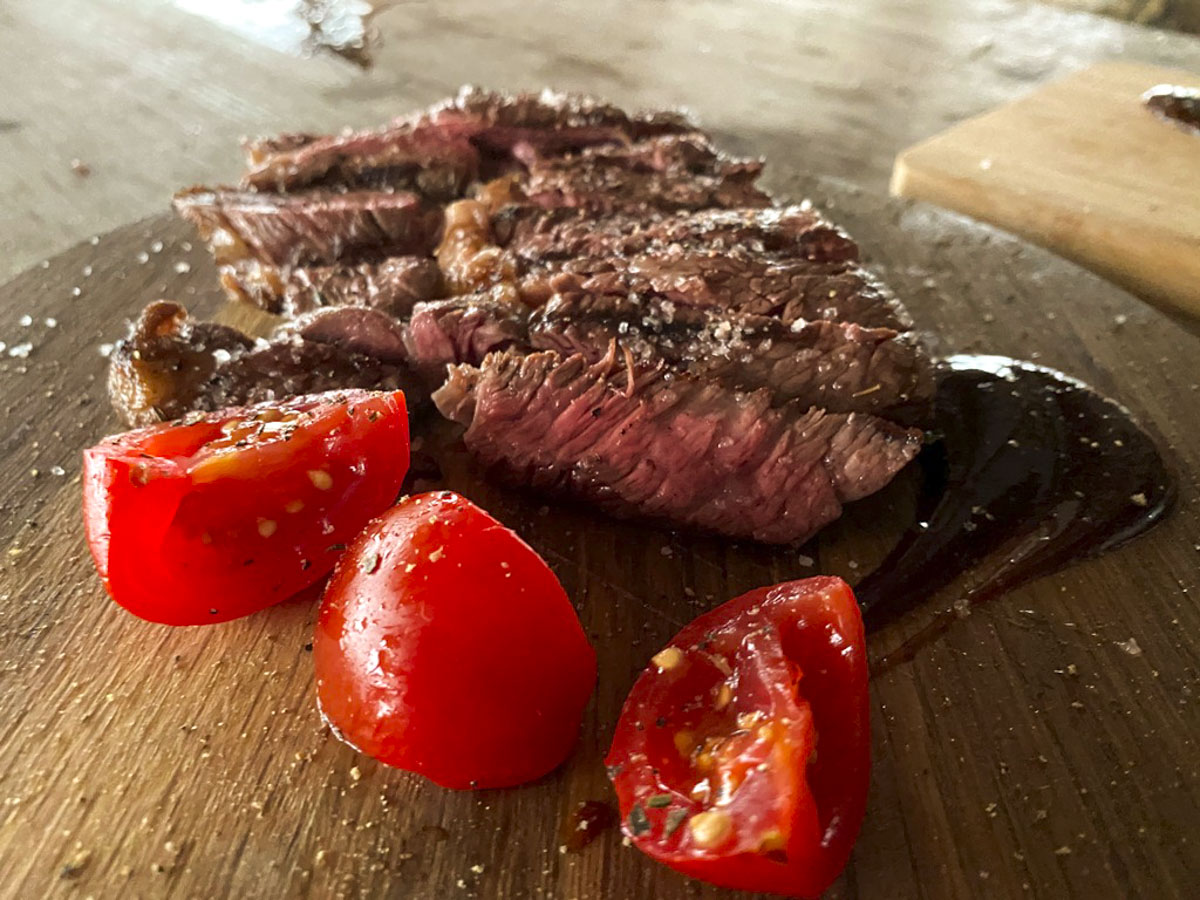 Who, if not butchers or cooks of the Bogdarnya restaurant, can better tell about the types of steaks and the peculiarities of their preparation? They will hold an informative and very tasty master class for you. While the meat is being prepared, experts will tell you which parts of the carcass are used for which steaks, what is dry aging and why it is needed, how and when to add spices to the meat (and whether it is necessary at all?). You will try two types of steaks: alternative and premium. And of course, you will learn how to cook a juicy steak at home: on the grill and in a frying pan. 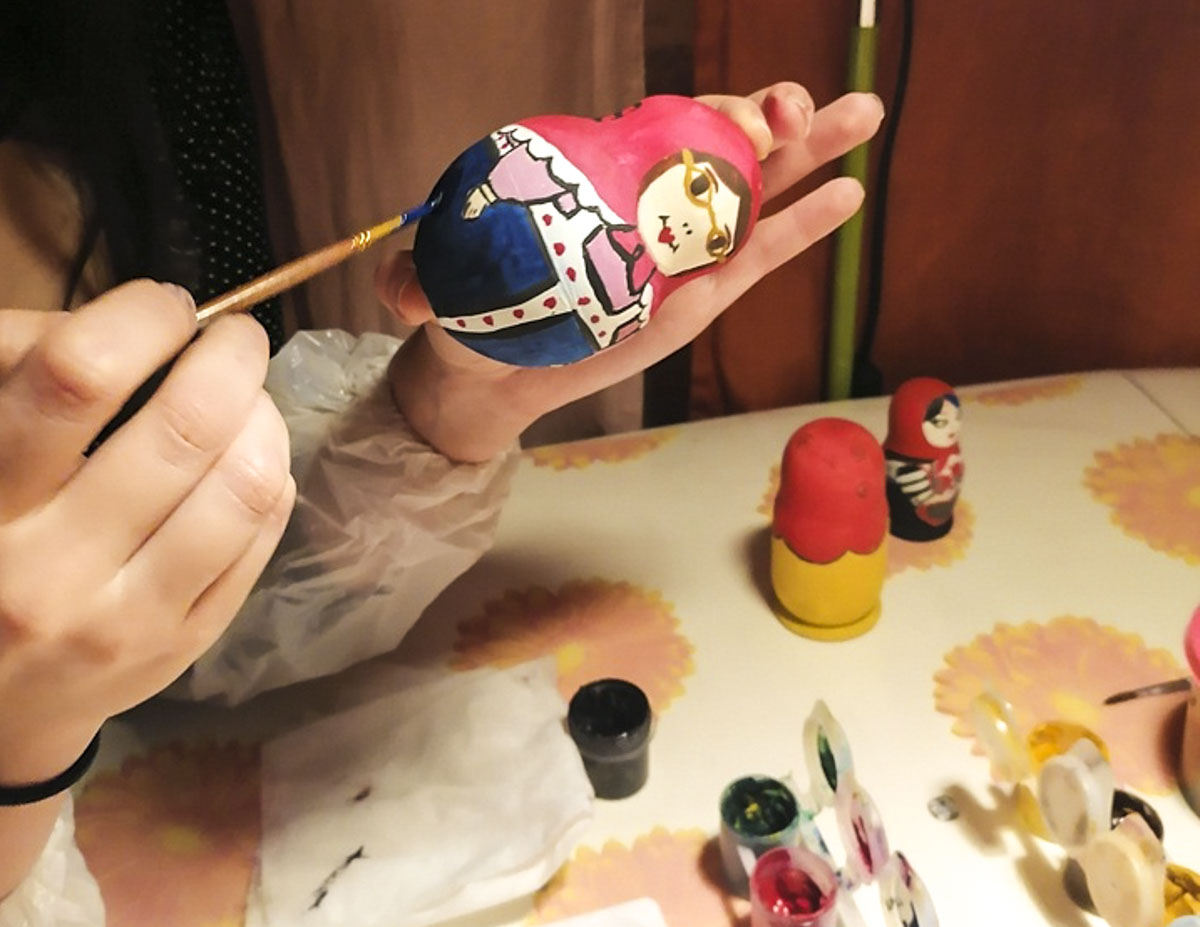 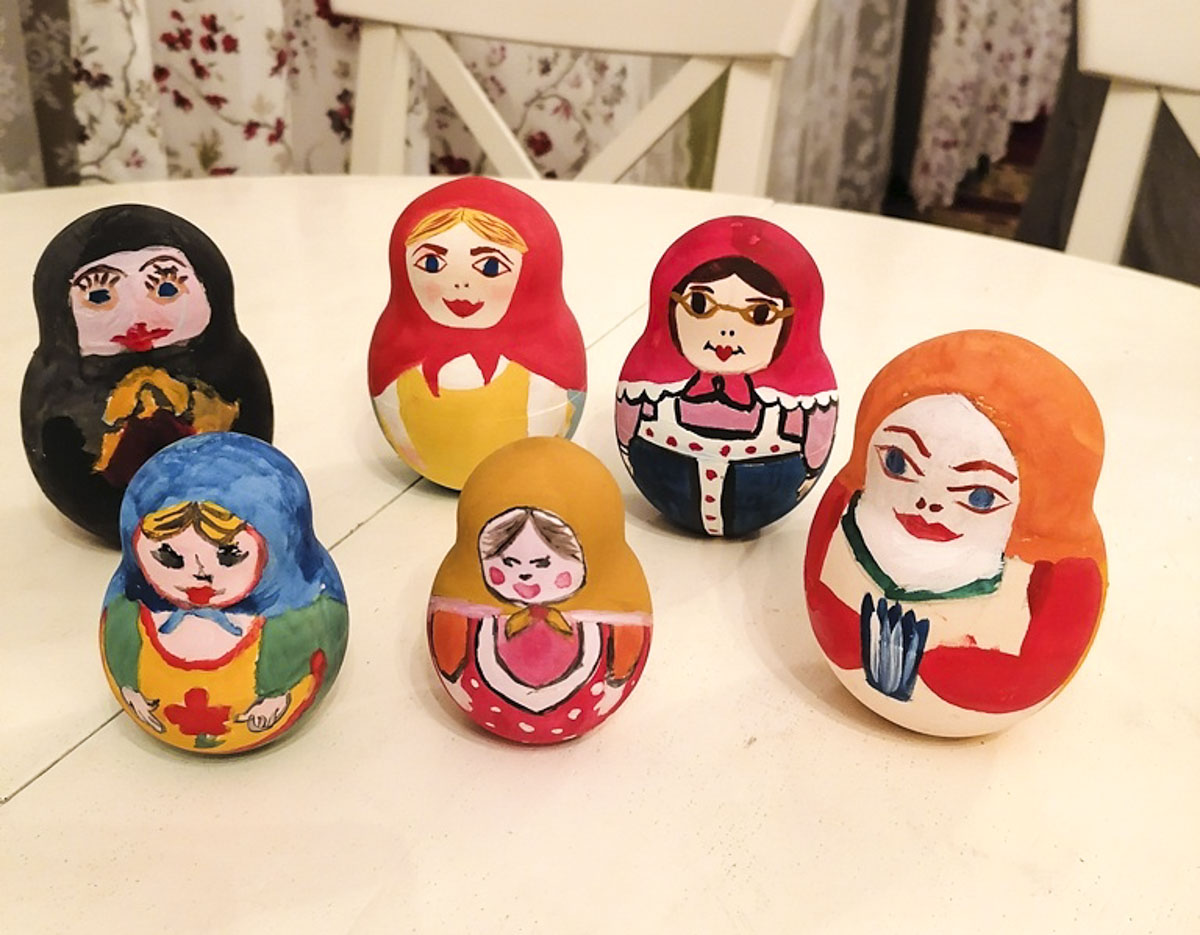 This ancient doll, which came to us from Japan, is now associated with native Russian traditions. During the lesson, you will learn the history of the matryoshka doll, get acquainted with different painting techniques, create your own unique toy. The atmosphere at the master class is more akin to meditation, when a slow dialogue is conducted during the creative process, because each participant is immersed in his own business.

Dinner on the farm with the freshest farm products

Breakfast at the hotel, check out.