Kamchatka. The land of bears and volcanoes

The easternmost part of Russia, the Far East is not without reason called the distant one — more than eight thousand kilometers separate it from Moscow, and local time is seven hours ahead of Moscow! And, according to reviews, the most benevolent and responsive people live in the Far East!

From July to September 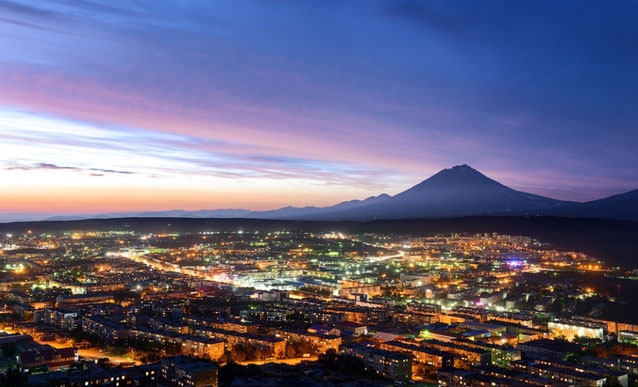 Arrival in the Yelizovo airport. Transfer to Petropavlovsk-Kamchatsky (photo stop at the monument Here Russia begins).
Tour of Petropavlovsk-Kamchatsky.
The tour unfolds a captivating story of the heroic past of the Petropavlovsk city: defense against the English-French squadron during the Crimean War, liberation movement during the Civil war, the heroic deeds of the Kamchatka citizens who liberated the Kuril islands. The tour will take you to the monuments honoring the discoverers of Kamchatka, its defenders, Great Patriotic war heroes. You will also visit the viewing platform at the Nikolskaya Sopka (Hill).
Transfer to the hotel, accommodation. 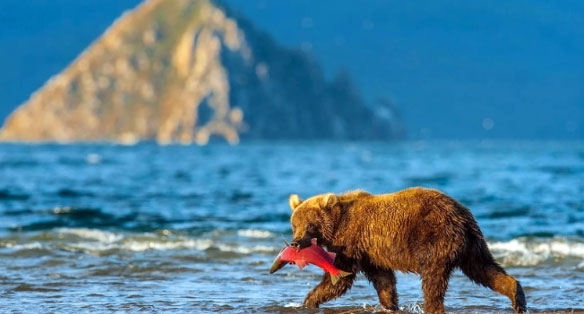 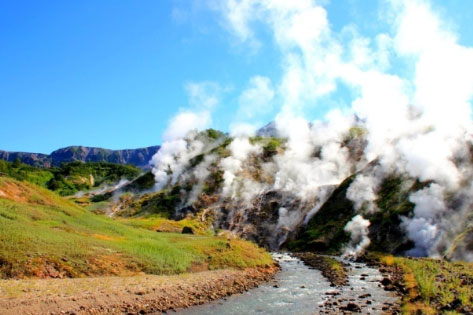 Optional tours: helicopter ride to the Geysers Valley or to Kurilskoye Lake (a unique opportunity to see bears in the wild) 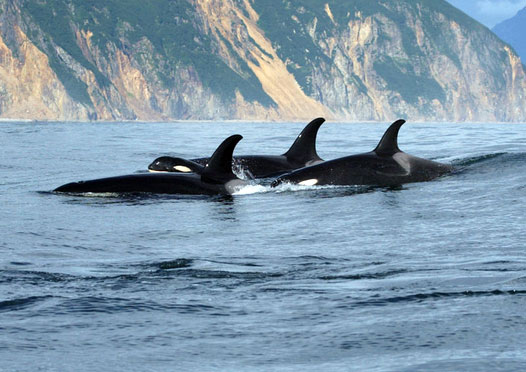 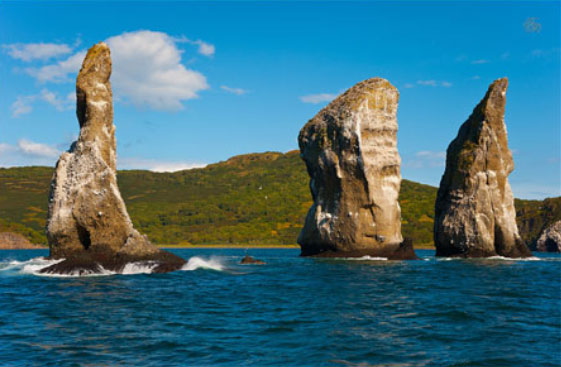 A sea-going motorboat will take you to the Russkaya Bay. On the way you will see picturesque rocks “Tri Brata” (“Three brothers”) and “Chortov Palets” (“Devil’s Finger”), and go close by the Zavoiko peninsula, spot sea mammals and colonies of various birds. Fishing will be organized in the Tikhaya (Calm) Bay.
Another stop at Opasniy (Dangerous) Cape and another opportunity for fishing Arrival in the Russkaya Bay.
The Russkaya Bay, narrow and azure in colour, cuts deep into the shore and is framed by steep hillsides. It is used to be called Akhomten until 1952. Nowadays it is one of the most picturesque spots around Petropavlovsk-Kamchatsky.
Disembark to swim in the lake (unless high side waves occur)
Lunch on board: “uha” (Russian fish soup) with salmon, fried fish, crab tasting Return to the hotel 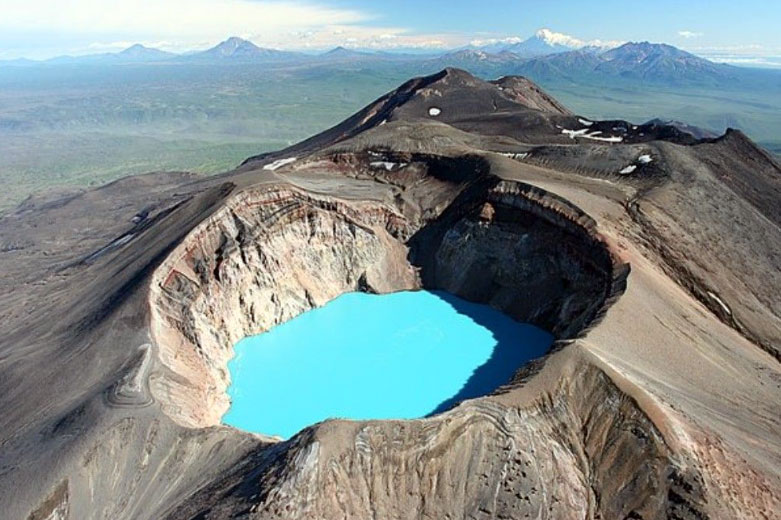 Leave Petropavlovsk-Kamchatsky by off-road vehicles and reach the foot of the volcano in 4 hours. The ride will cover the distance of 110 km. A few photo stops are scheduled during the ride.
Upon reaching the caldera of the volcano you will be served light snacks and tea and safety instructions will be given.
This volcano is a crest-shaped mass of tapered rocks rising out of the caldera with the dimensions of 9*14 m. The top part of the volcano is dotted with a collection of various craters. The biggest and the most picturesque crater — The Blue Lake — can be found in the eastern part of the volcano. The lake itself is 200m deep and measures 500m in diameter.
Walking tour of the craters. The tour lasts 5-6 hours and covers the distance of 12 km. Light snacks on top of the volcano.
Return to the foot of the volcano and a meal Back to the hotel 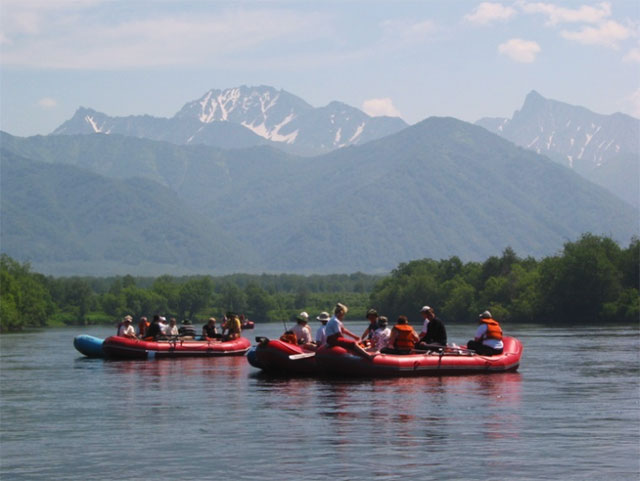 Departure by off-road vehicles to the village Malka Adjustment of the rafting equipment. Safety instructions, light snacks and tea Rafting trip with stops for fishing (fishing equipment provided).
You will witness truly amazing landscapes unfolding in front of you. It is here where Sredinny Range begins. You will see carpets of grass, rocky river shores, meadows of irises and copses of birch trees. You will have time for mushroom hunting and bird watching and provided luck is on your side, will maybe even spot a bear.
Lunch during on the stops ashore Rafting trip continues.
After the rafting trip the transfer will take you to the Malkin hot springs for bathing Return to the hotel 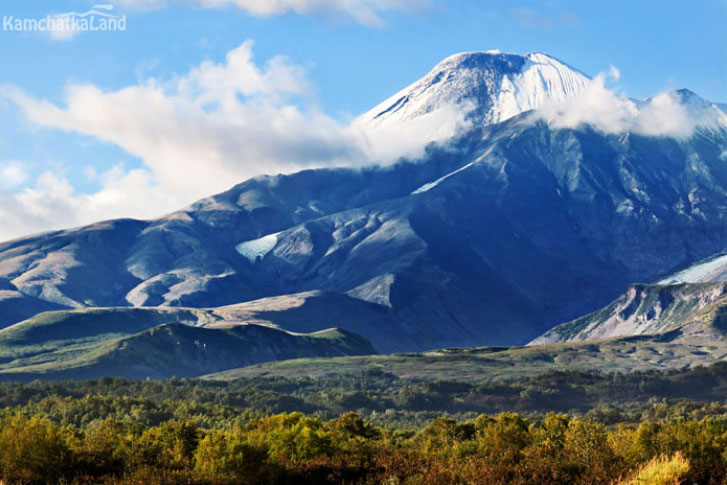 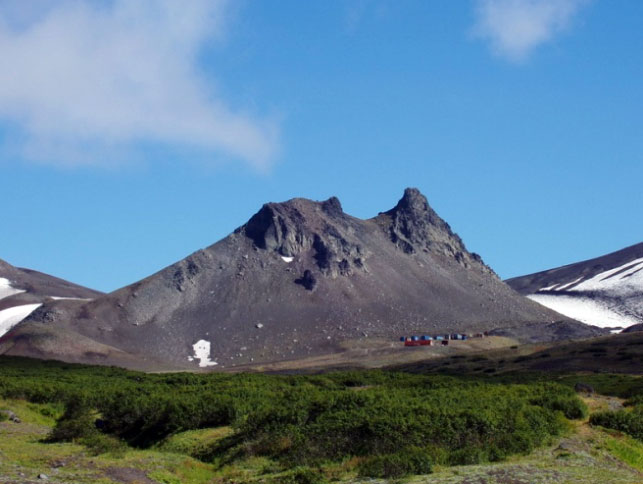 Leave by off-road vehicles to the foot of the Avachinsky Volcano.
Free time to explore the location, walk to Verblyud (Camel) mountain. Ascension of the mountain.
Verblyud, nowadays a nature monument, is situated on the pass between the volcanoes Avachinsky and Koryaksky. It is small rock massif with two pointed peaks. The mountain was formed as the result of the eruption of two neighboring volcanoes – Avachinsky and Koryaksky. During the volcanic activity the moving earth’s crust prompted a huge crack to ooze lava which later formed the mountain.
Light snacks.
Return to the vehicles and leave for Khalaktyrsky beach.
Free time on this picturesque beach with black sand and a walk to the tundra. Enjoy the views of the volcanoes, the ocean and the nearest rocks.
Transfer to the hotel

Leave the hotel before noon.
Transfer to the airport with a stop at the local fish market.