Guaranteed English, French, German, Italian, Spain service from 2 pax.
The program is preliminary. The excursion blocks can be replaced with the similar ones, without changing main waypoints. 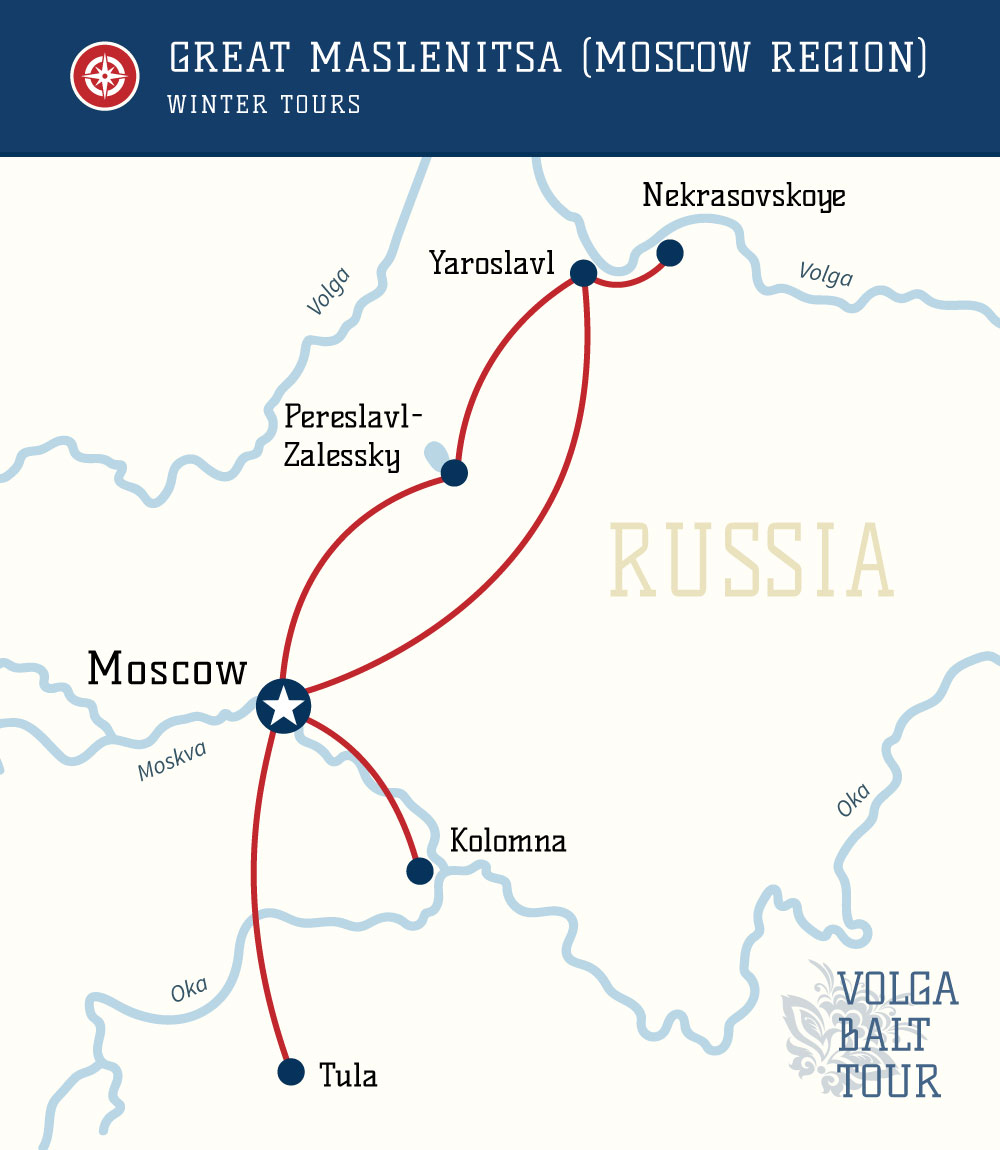 Pick-up from the airport and transfer to the hotel.

Return to Moscow by bus.

Ukrainian dinner in a local restaurant.

Optional: Night walking tour of Moscow “Mystery of the Capital”.

Transfer to the Kursky railway station. Depart for Tula by the train “Lastochka” (places in cars with seating arrangement will be provided).

Tour of the Kremlin of Tula.

Lunch in a local restaurant.

Visit to the Museum of the Tula confectionary and gingerbread-producing factory:

Depart for Moscow by train (places in cars with seating arrangement will be provided).

Russian dinner in a local restaurant.

Optional: bus tour “Moscow by night with a visit to the Moscow underground stations”

Depart for Kolomna by bus.

City tour with a visit to the Kremlin of Kolomna.

“Great Maslenitsa” festivities outside with pancake tasting and Maslenitsa burning.

Late lunch at a local cafe.

Depart for Moscow by bus.

Caucasian dinner in a local restaurant.

Optional: Visit to the viewing platform in the Moscow-City complex.

Check out of the hotel, transfer to the Yaroslavsky railway station.

Depart for Yaroslavl by train (places in cars with seating arrangement will be provided).

Lunch will be organized in a café located on the territory of Russia’s only Salt island.

Visit to the unique Landscape and Ethnographic Salt museum.

Return to Yaroslavl. Accommodation in the hotel.

Check-out of the hotel, depart for Pereslavl-Zalessky by bus.

Interactive gastronomic program in the museum “The Kingdom of vendace” with vendace tasting, drinks and freshly-baked bread.

Vendace, an incredibly delicious fish, is a true gastronomic brand of the city of Pereslavl-Zalessky. After tasting this fish you will understand why it was so favored by Russian tsars. Then the guide will tell you how this fish was caught, salted and preserved.

Excursion to the museum of tea with tasting three kinds of willow-herb tea.

You will learn what kind of tea the Russians drank before the 19th century which saw the speed popularization of the Chinese and Indian teas. The tea expert will tell you about the willow-herb tea, about the teas that were made in Siberia and Far East and when Russian tea makers learnt to obtain fermented tea.

Depart for Moscow by bus. Accommodation in the hotel.

Dinner in the hotel.

Optional: Dinner with wine tasting (instead of the dinner included in the tour).