A tour to Lake Baikal comes short of becoming a life-changing experince for a traveller. Here you feel the power of nature untamed by man, its purity and force, enjoy the beauty of the crystal-clear water surrounded by mountains. The highlights of this 8-day tour include a visit to Olkhon Island, the biggest island of the lake with unique weather conditions and an ancient spiritual heritage of shamanism, a trip by Circum Baikal Railroad and visits to the most important sights in and around Irkutsk, one of the largest cities in Siberia. 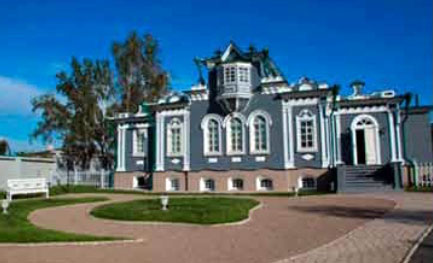 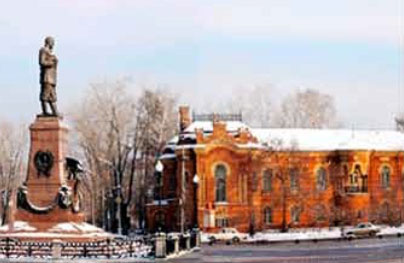 Arrival to Irkutsk.
Meeting at the airport with a guide.
Transfer to the hotel, check-in, tourists leave things and go for lunch.
City tour of Irkutsk.
Dinner in a hotel.
Night at hotel. 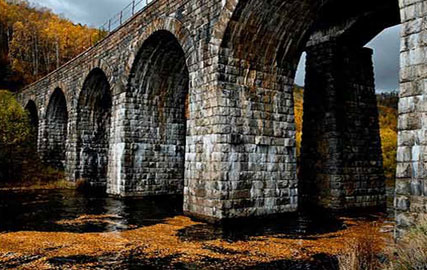 Breakfast in the hotel.
Transfer to the railway station.
Tour to Circum Baikal Rail Road.

The section of the Trans - Siberian Railroad on the southern shore of Baikal from Port Baikal to Kultuk is called the Circumbaikal Railway. From 1900 to 1904 the raiway tracks from Irkutsk stopped at Port Baikal, across the mouth of the Angara from Listvyanka. From here ice-breaking steam ships carried passengers and trains across the lake, where rails continued. It took 4 years to put the first line around southwestern shore of Baikal and completed the Trans-Siberian. Extension of this line is 84 km, it is the shortest but most difficult section of the whole railroad, it required a tunnel or bridge almost every kilometer. Circumbaikal Railway is a kind of museum of engineering constructions and building art. It is the place where the stonework of tunnels’portals, bearing walls, arches and different picturesque rocks have run into one in a remarkable manner. Railroad includes monuments of architecture, engineering and technical art (tunnels, galleries, bridges, viaducts and bearing walls). 56 tunnels, galleries and other detached buildings, 248 bridges and viaducts, 268 bearing walls, 172 monuments of architecture survive to this day. Together with Russian employees, skilled Italian, Turkish and Chinese contract mason took part in building of bridges and tunnels. In 1957 the Irkutsk dam was erected and the part of the original railroad from Irkutsk to Port Baikal was flooded. This section was replaced with the shortcut, going strait from the city to south extremity of Baikal. It turned Circumbaikal to a rarely used branch line. Nowadays the railroad is mostly used as a tourist destination for the tourist route.

Arrival to Irkutsk in the evening.
Transfer to a hotel / restaurant.
Dinner at hotel.
Nigh at hotel. 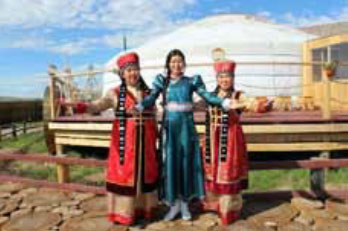 Breakfast in the hotel.
Transfer from Irkutsk to Olkhon.
Lunch on the way in a cafe.
Folk show, ritual of shaman and ethnographic museum in Ust-Orda.

Ust-Orda Buryat village is located at the distance of 70km from Irkutsk, alongside Kachugskiy highway. It is an administrative center of numerous Buryat Ulus Ekhirit-Bulagat tribes. There is a regional ethnographic museum in Ust-Orda, which contains the history about territory development from ancient time to nowadays. Rich collections on archeology, ethnography, household and ceremonies of Buryats get visitors familiarized with specifics of Buryat history and culture in Baikal region.
After museum exhibition – visit the Buryat manor, located in the museum yard, where the local folk ensemble will perform an ethno- show – entertainment with dances and songs. After – meeting with Buryat shaman. Contemporary shaman – generally an educated person living among people. He gives lectures, he is a keeper of ancient traditions, ceremonies. Shaman will communicate with tourists, reveal shamanistic traditions, will help to find a correct way along the Life river. You can ask him the inmost questions, ask to communicate with spirits, know the secrets of mental world.

Crossing on ferry boat: Sakhyurta – Olkhon.
Russian jeep ransfer to Khuzhir.
Arrival in Khuzhir in the evening.
Dinner in a hotel.
Check in and night at hotel. 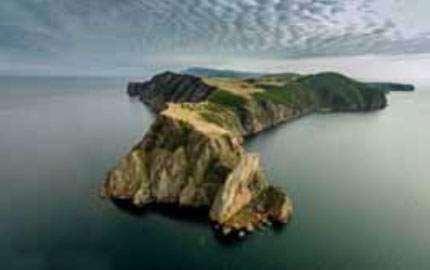 Breakfast in the hotel.
Tour to the most northern part of Olkhon island – Khoboy cape, all day.

At the northern part of Olkhon there is a bright showplace of Baikal – Khoboy cape. A majestic mountain, which looks like a tusk from shore and a woman profile from the water-side. The place is notable for its many-voiced echo, which is reflected from a high rock. Perhaps that is why since ancient times Khoboy is considered a sacred place. By the way, according to the legend, the first Baikal shaman was born here.
In June, you can find Baikal seals here, which swim here to soak up the sunshine on the coastal stones below.
Not far from Cape Khoboy, to the west, is an interesting shamanic place. You can find it on the posts of the spirit of the ship, about the serge, which are installed there. Taylagans, shaman prayers are performed there. They say that in this place the first Baikal shaman received his ability. From the sea, Khoboy reminds a female profile. According to legend, this is a frozen Buryat, who insistently asked the spirits to have the same palace as her husband. The spirits were angry at her and turned into stone, leaving to stand as long as human envy and greed lived on earth.

Lunch included.
Dinner in a hotel.
Night at hotel in Khuzhir. 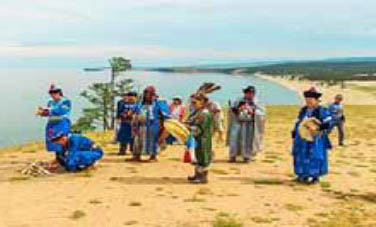 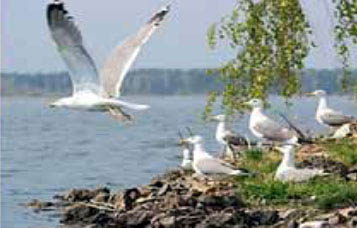 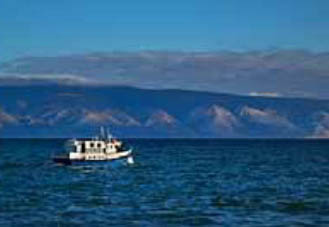 Breakfast in a hotel.
Free day on Olkhon Island.

Olkhon is the largest island at Lake Baikal. It is 71 km long and 15-25 km wide. Olkhon is the most beautiful and mysterious place at the lake. The climate and landscape here are different from the rest of the lake. Average temperature in Summer is 20 - 23°C above zero, many sunny days, rains are seldom.
In winter there is not much snow, windy, temperature is about -20°C. Nature of Olkhon is outstandingly various: there are gorgeous sandy beaches, spacious steppe hills, dramatic capes, pine-tree forests and picturesque rocks, beautifully coloured with yellow, red, orange lichens. The island’s dry southern end is rolling grassland - great for off-road mountain bike. This transform in the mid part into thick woodland and at the northern tip there’s a fair chance of spotting freshwater seals. The channel between the island and the mainland is called Maloe More, it is one of the few places at Baikal where water in summer is warm enough for swimming. The island had been formed during millions of years of tectonic development. Lake Baikal’s deepest point (1637m) is near the Eastern Shore of the Island. On the island there are several small lakes, the highest mountain is the forbidden Zhima Peak, 1300m-high, long time a place for shaman’s ceremonies and funerals.
Olkhon Island has several archaeological sites, beginning with the remains of an Iron Age fortress built by mysterious Kurykans, the ancient Chinese people who lived here between 500 and 1000 AD. The Island is famous as the centre of Shamanism, the common religion of the indigenous peoples of Siberia - Buryats. Many of the shamans sacred places and rock paintings are still found here. The biggest settlement of Olkhon is the fishing village of Khuzhir with population of about 2.000 people.

In the evening excursion to Seagull island.
Dinner in a hotel.
Night in the hotel (Khuzhir). 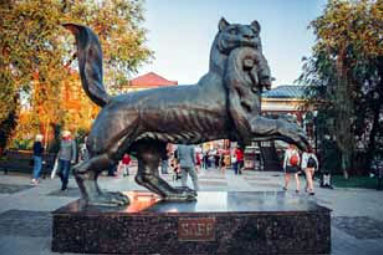 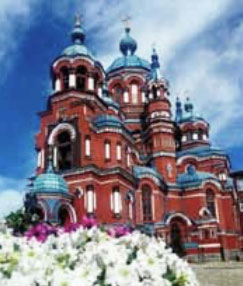 Breakfast in a hotel.
Russian jeep transfer to the ferry.
Crossing on ferry boat: Olkhon — Sakhyurta.

Ferry operates from mid-May till mid-November from 09:00 am till 8:00 pm. In wintertime (from the end of January till the beginning of April) it is possible to go to the island on the ice from mainland.

Lunch on the way in a cafe.
Arrival to Irkutsk.
Shopping.
Dinner.
Transfer to a hotel.
Check in, night at hotel. 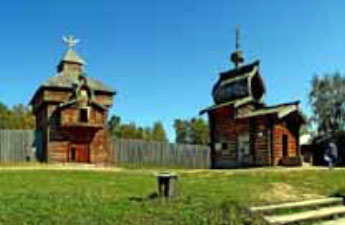 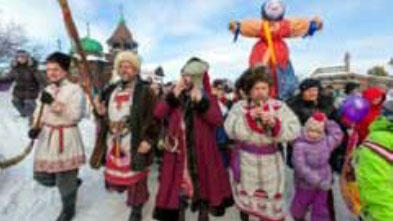 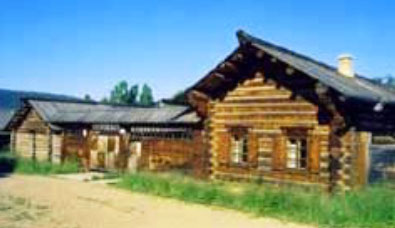 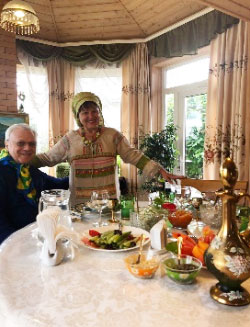 Breakfast in the hotel.
Transfer to the Museum of Wooden Architecture «Taltsy» (about 50 km from Irkutsk), visiting the museum.

Architectural-ethnographic Museum «Taltsy» – a unique collection of monuments of history, architecture and Ethnography of XVII–XX centuries It is located on the right Bank of the Angara river at the 47th kilometer of the Baikal highway on the way from Irkutsk to lake Baikal. The open-air Museum complex attracts visitors with the opportunity of direct acquaintance with the material and spiritual culture of the peoples of the Baikal region. The Museum retrospectively recreates four historical and cultural zones: Russian, Buryat, Evenk and Tofalar. Buryats, Evenks and Tofs are indigenous peoples of the Baikal region. About their life, features of life and beliefs tell Evenk and Tofalar camps, complex of Evenk burials and Buryat ulus-letnik.
Russian Angara-Ilim exposition zone, which contains monuments of wooden architecture of the Baikal region XVII-early XX century, mainly exported from the territory of the Bratsk and Ust-Ilim districts of the Irkutsk region, is represented by several groups. The Museum complex of «Parish village», recreating the administrative center of the late XIX — early XX century, includes a set of «Township Board», the parish school, a manor house of the parish clerk, the manor of the town of Cossack. Its main attraction is the unique monuments of history and architecture of defense and religious architecture: the Spasskaya road tower (1667) and the Kazan Church (1679) of the Ilim fortress.

Lunch, Russian dishes.
Visit to the Baikal Museum.
The ascent of the cable car to the highest point in Listvyanka - Chersky Peak.
Transfer to Irkutsk.
Dinner in Russian family:
- show how ordinary people live,
- to visit the home,
- nutrition partly in families,
- visit Russian banya,
- visit the farm (goats, chickens, geese, rabbits, etc.) ,
- to visit the greenhouses/ hothouses/ greenhouses.
Transfer to the hotel.
Night in the hotel. 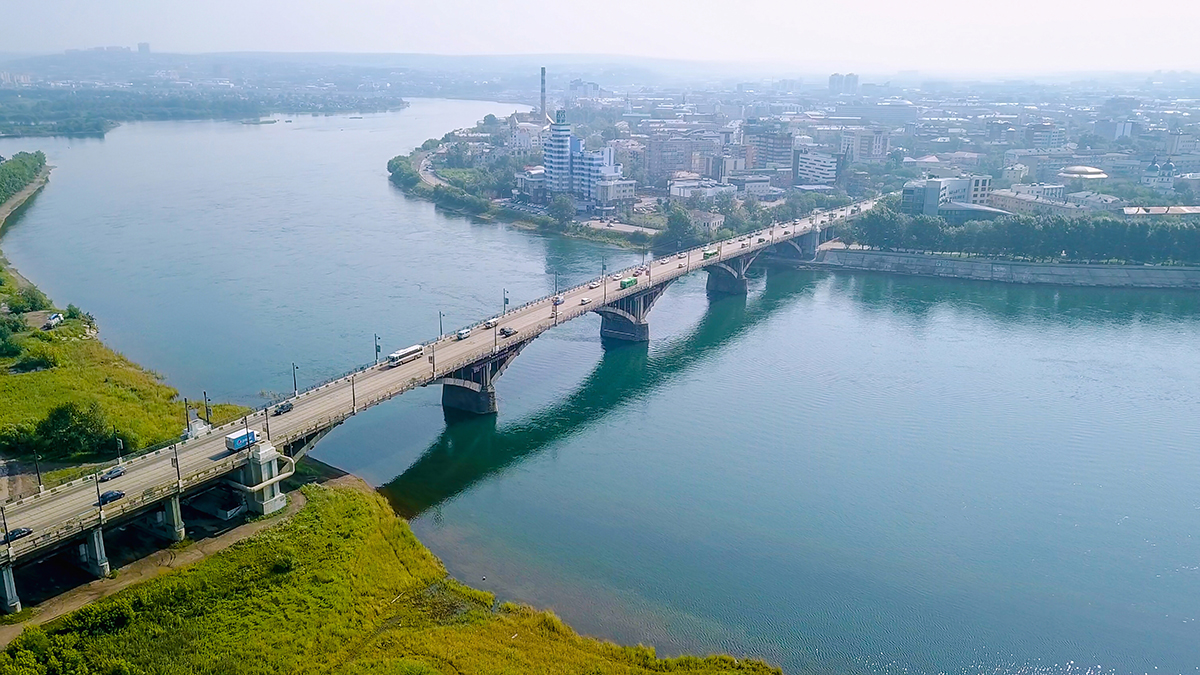 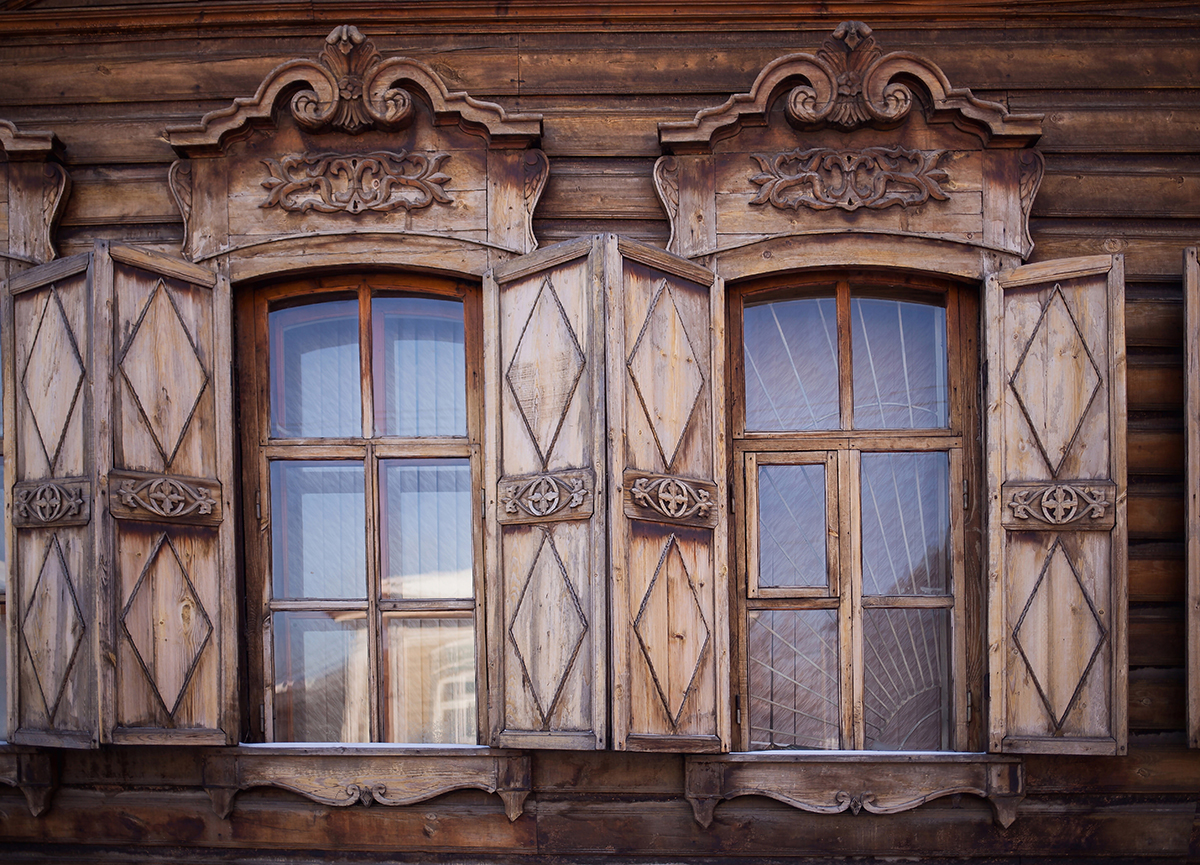 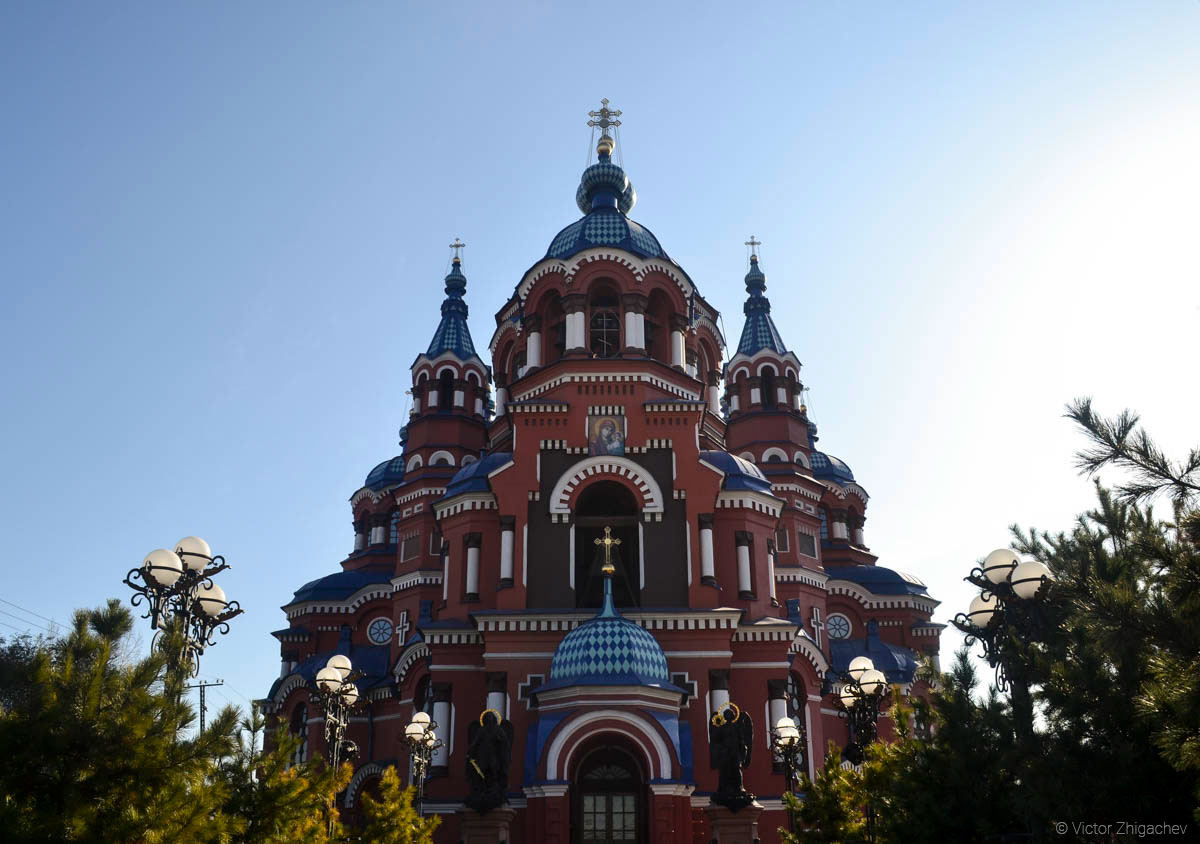 Breakfast in a hotel.
Transfer to the airport.