Logistically, the tour is organized in the most optimal way for traveling – daily bicycle rides during the day accompanied by a bus escort with your luggages, picnic lunches along the way and comfortable night rest in hotels along the route.
For our Cycling tours we chose only the trustworthy suppliers who share our passion for cycling and for discovery, love and knowledge of our country, and care about the people who travel with us. Our supplier for this tour has a 30 years’ experience in organizing cycling trips, and over 50 itineraries to offer. Join us for an adventure and look forward to an opportunity to welcome you in Russia!

9 days / 8 nights
Any date from June to August

Meeting with a guide at the airport.

Transfer to the hotel. Check-in. 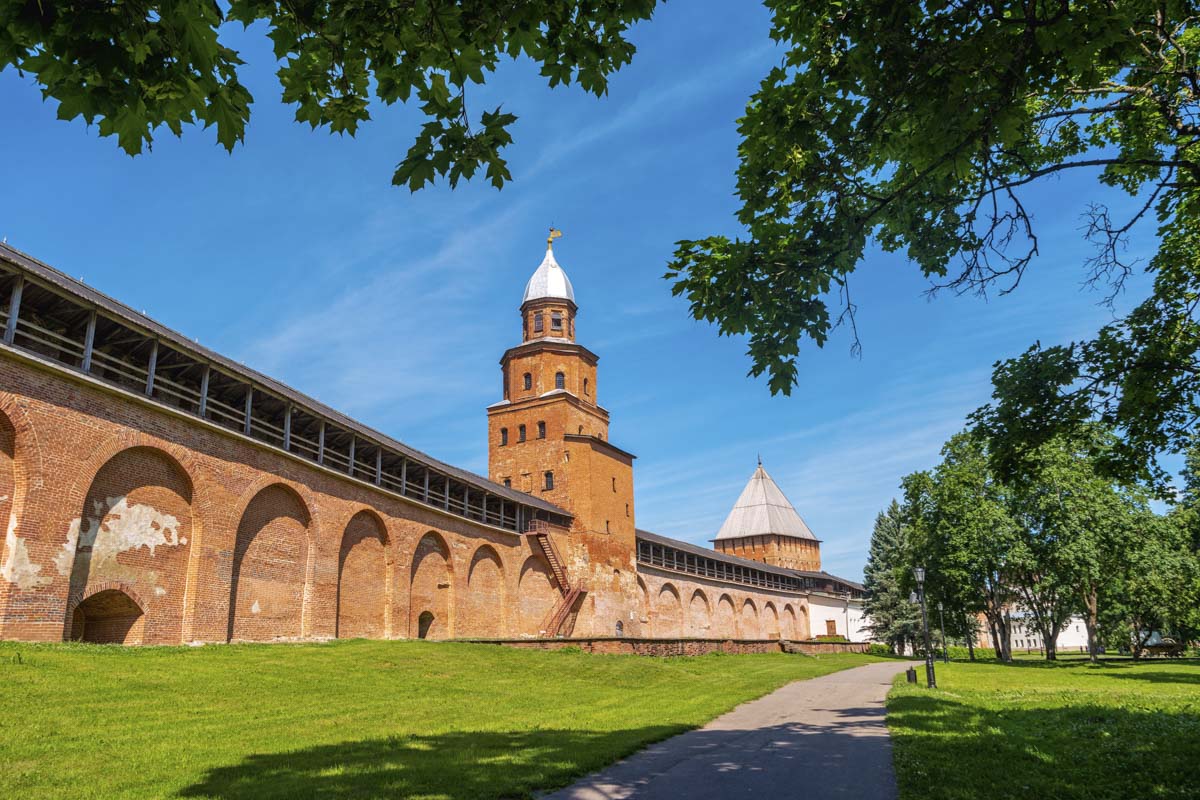 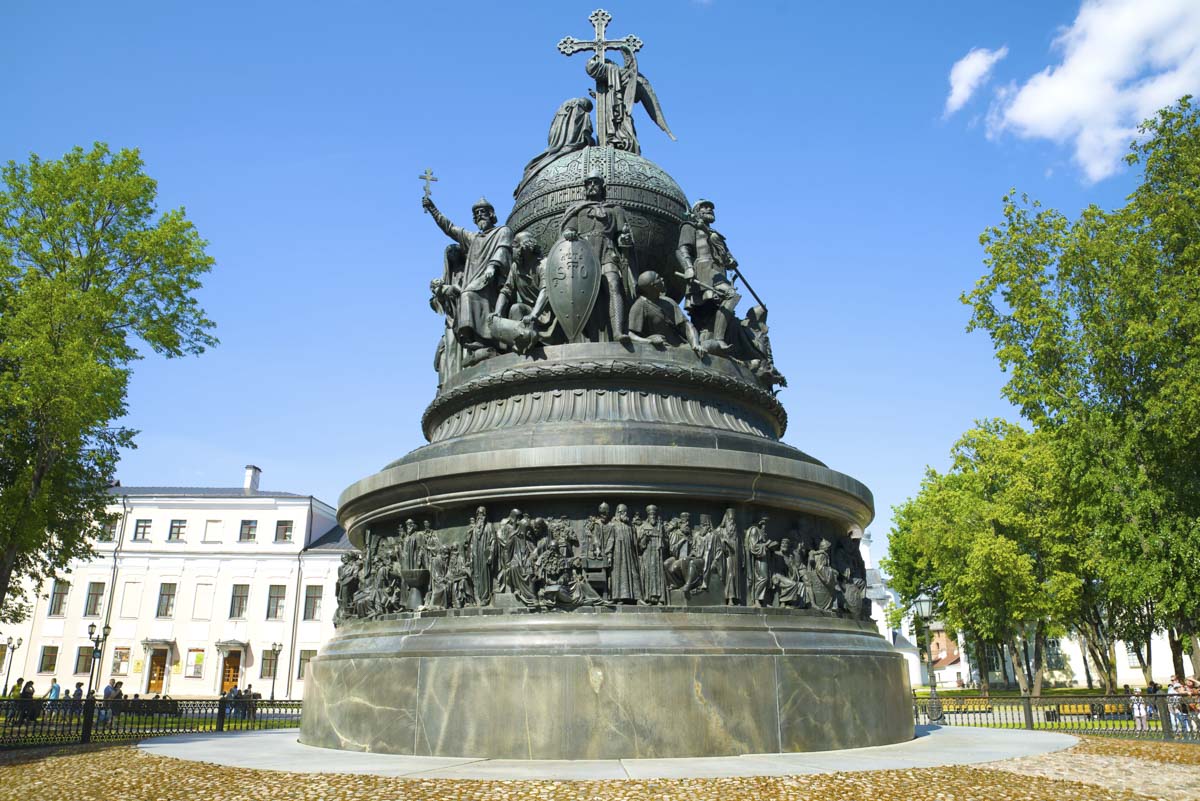 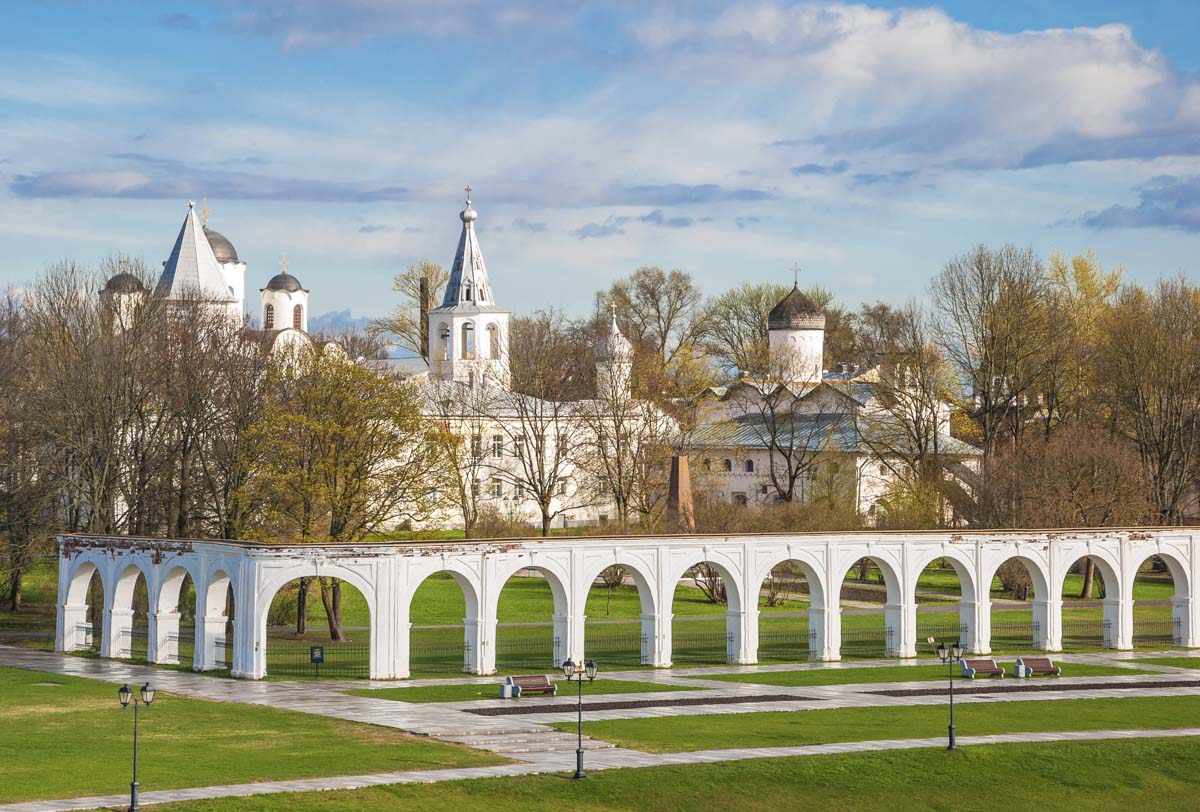 Lunch in a local café. Check-in.

Veliky Novgorod is one of the oldest cities in Russia on the banks of River Volkhov. You will see many well-preserved ancient churches dating back to 10th century, some of them with beautiful frescoes, and you will visit an ancient fortress Detinets with its central Saint Sofia Cathedral. The Novgorod Kremlin, or Detinets, as was called in Novgorod in antiquity, laid down by prince Yaroslav, is the oldest Kremlin preserved in Russia (1044 year of construction). The Kremlin was the administrative, public, and religious center of Novgorod. Its walls were protected by the main one – Saint Sophia Cathedral, the oldest surviving church in Russia. 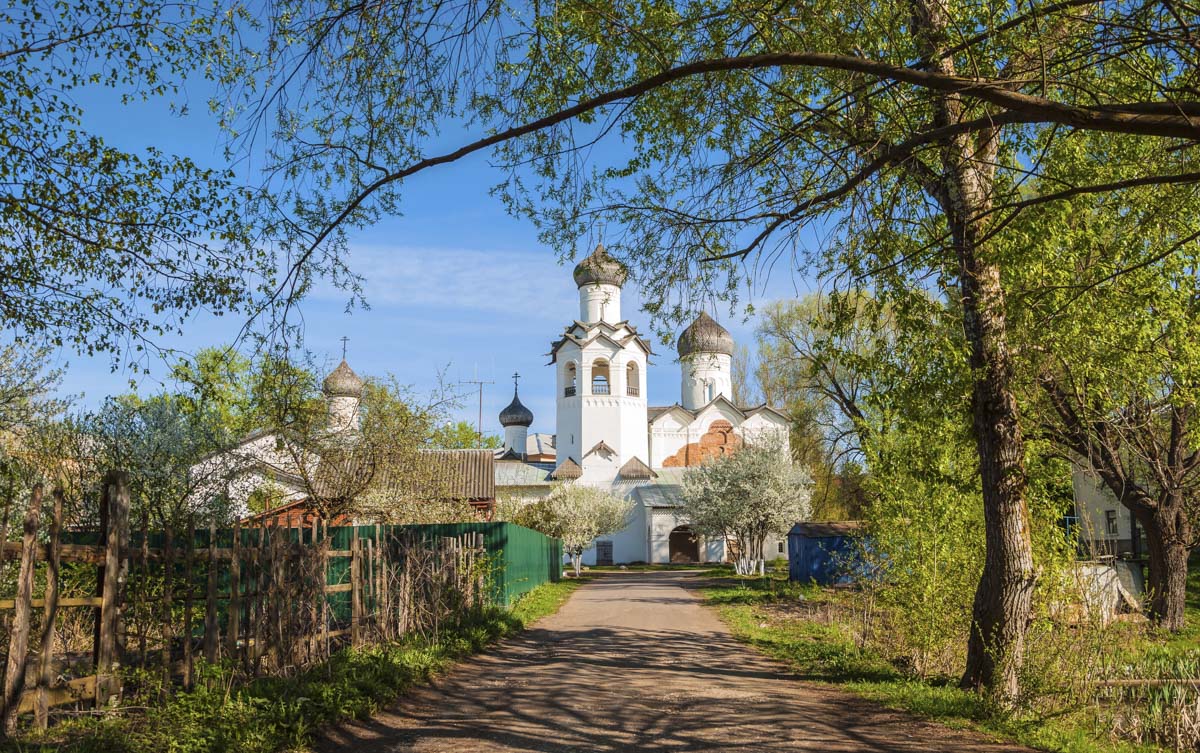 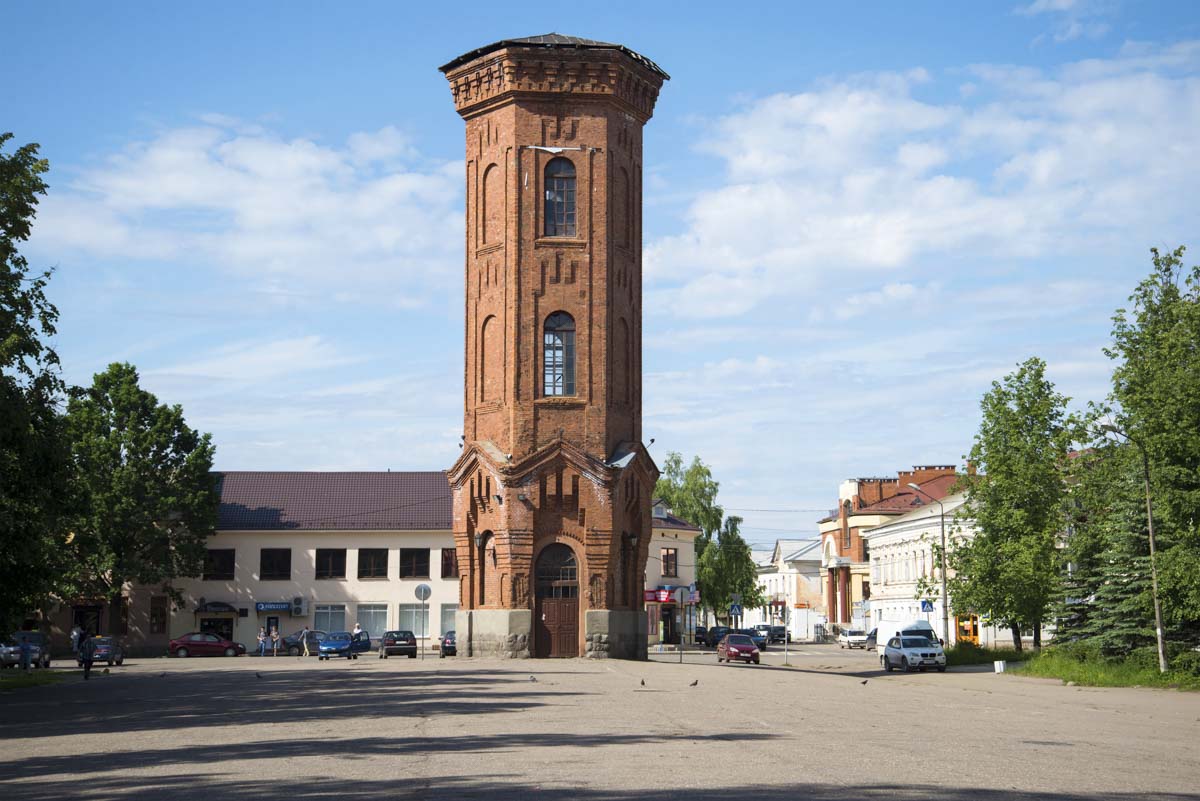 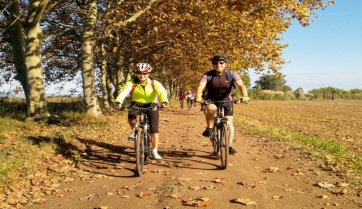 We bear round the western side of Lake Ilmen, crossing the rivers that flow into it and passing by the ancient Yuriev Monastery and some tiny fishing villages. We shall be crossing the Shelon River at Shimsk. Soon afterwards we pass the small town of Korostyn and its beautiful church. A high bank will serve there as a superb vantage point from which one can view the beautiful Ilmen panorama.

Transfer to Staraya Russa by bus.

Walking city tour with a visit to the house-museum of F. M. Dostoyevsky.

Staraya Russa – a pretty town founded in the 11th century on salt lands and the major supplier of salt to Russia for centuries. Today Staraya Russa is better known as a quiet country resort town boasting a number of lovely ancient churches. On the banks of the Pererytitsa we will visit a large wooden house where F.M. Dostoyevsky once lived – now it serves as a museum.

Check-in to the hotel in Staraya Russa.

In the morning we depart to River Pola and cycle further south. We catch a glimpse of the archaic lifestyle and cordiality of the villages we pass. Here too we shall see how the war has left its mark. Just beyond the village of Tsemena there is an extraordinary burial ground for German soldiers whose remains were discovered in the surrounding woods and marshes. We hit the first bit of uphill as we move out of the Ilmen lowland and into the Valdai Heights climbing no more than 300 meters. This highland is the watershed for rivers of the Baltic, Caspian, and the Black Sea basins. The road then winds off among hills, wood copses, lakes, and fields of flax.

The uniqueness of Seliger is in his geography. The lake, which arose as a result of the influence of an ancient glacier, is a system of reaches with numerous deep bays, channels and islands. As a result, a relatively small lake has a total length of only the main coastline of more than 500 km. The coasts are winding, with a diverse relief and vegetation. 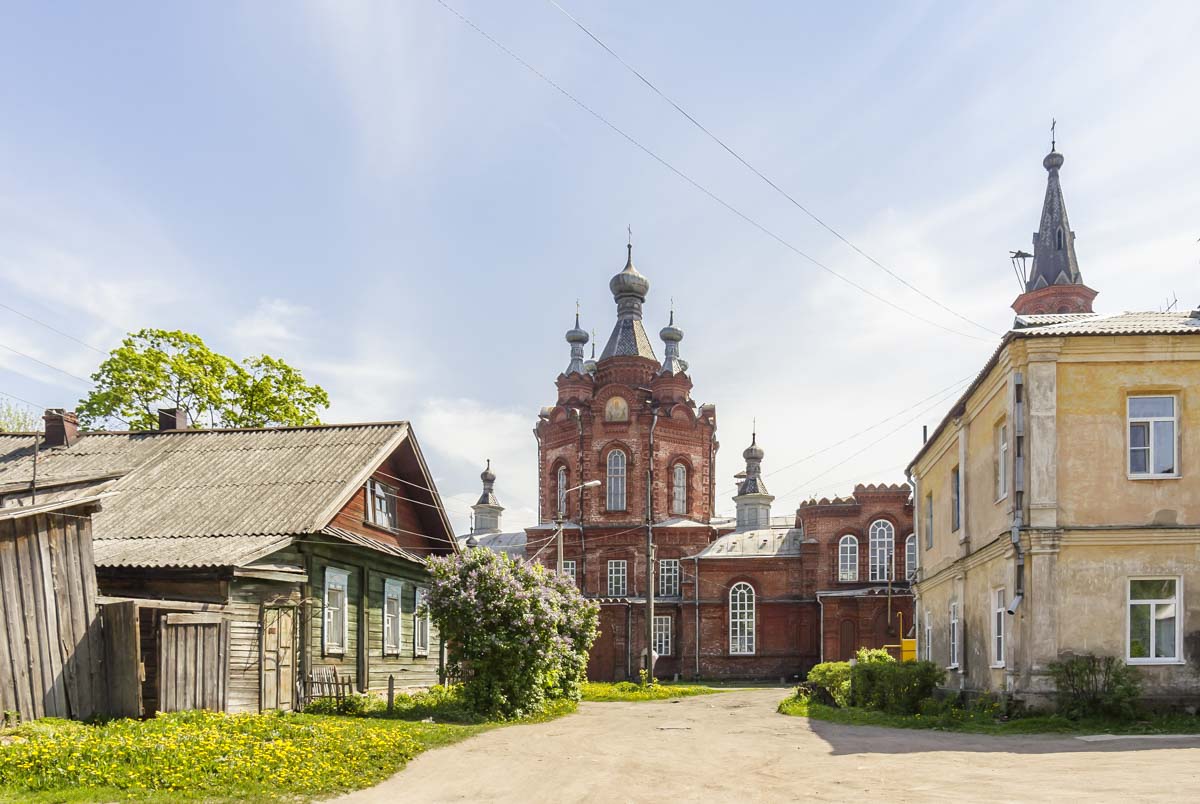 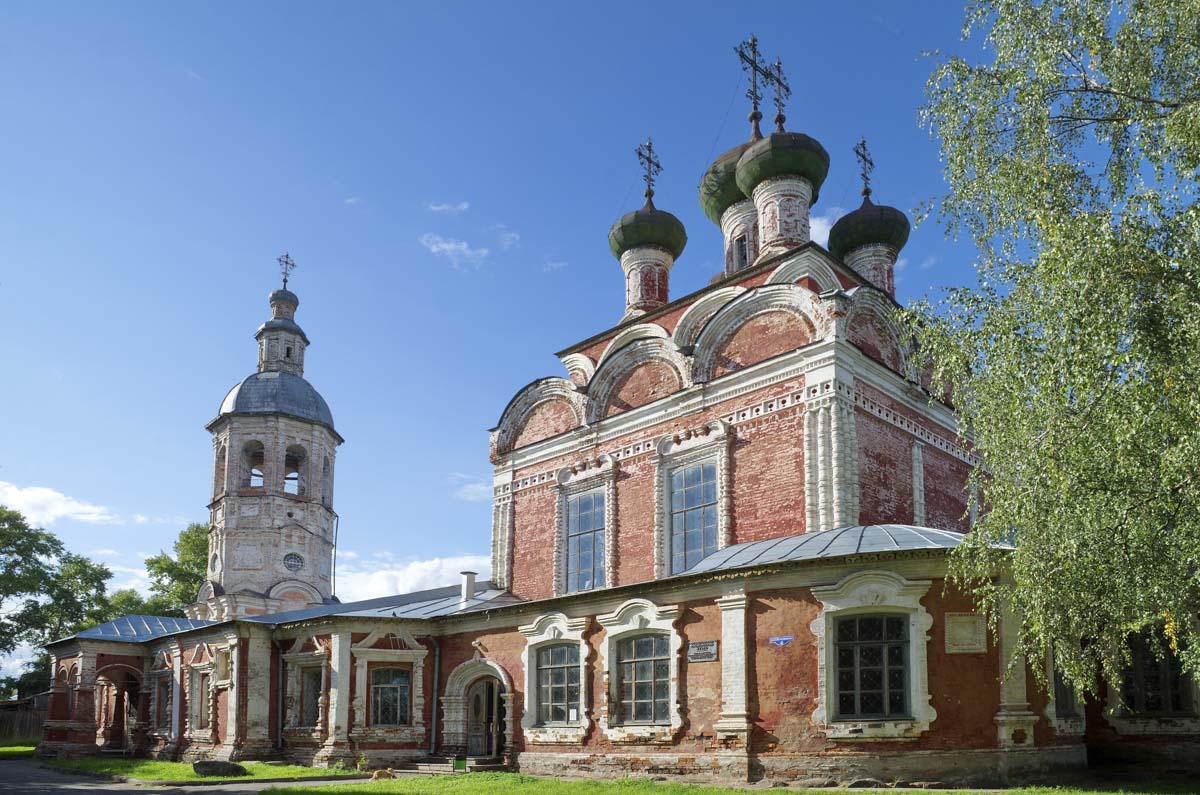 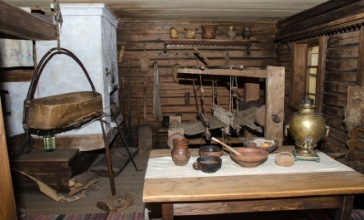 Motor boat cruise on lake Seliger to the Ostashkov.

In the morning we continue cycling along Lake Seliger, and then take motorboats for the cruise on Lake Seliger to Ostashkov. We pass Nilova Pustyn, a monastery that stands as a superb example of Russian Classicism and the Baroque on Stolbny Island.

Walking city tour with a visit to the Bogoroditsky Zhitenny Convent.

Ostashkov is a pretty old town located on a peninsula at Seliger Lake. As we gaze out at the fishing boats, we realize that many of the low storey buildings lining the quiet streets of Ostashkov behind us have retained much of the sedate manner of the 19th century. The old towns is dominated by two impressive and nicely decorated bell-towers – those of the Trinity Cathedral and of the Church of Resurrection. Near the tip of the peninsula you visit the Bogoroditsky Zhitenny Convent.

Option: Dinner in the hotel 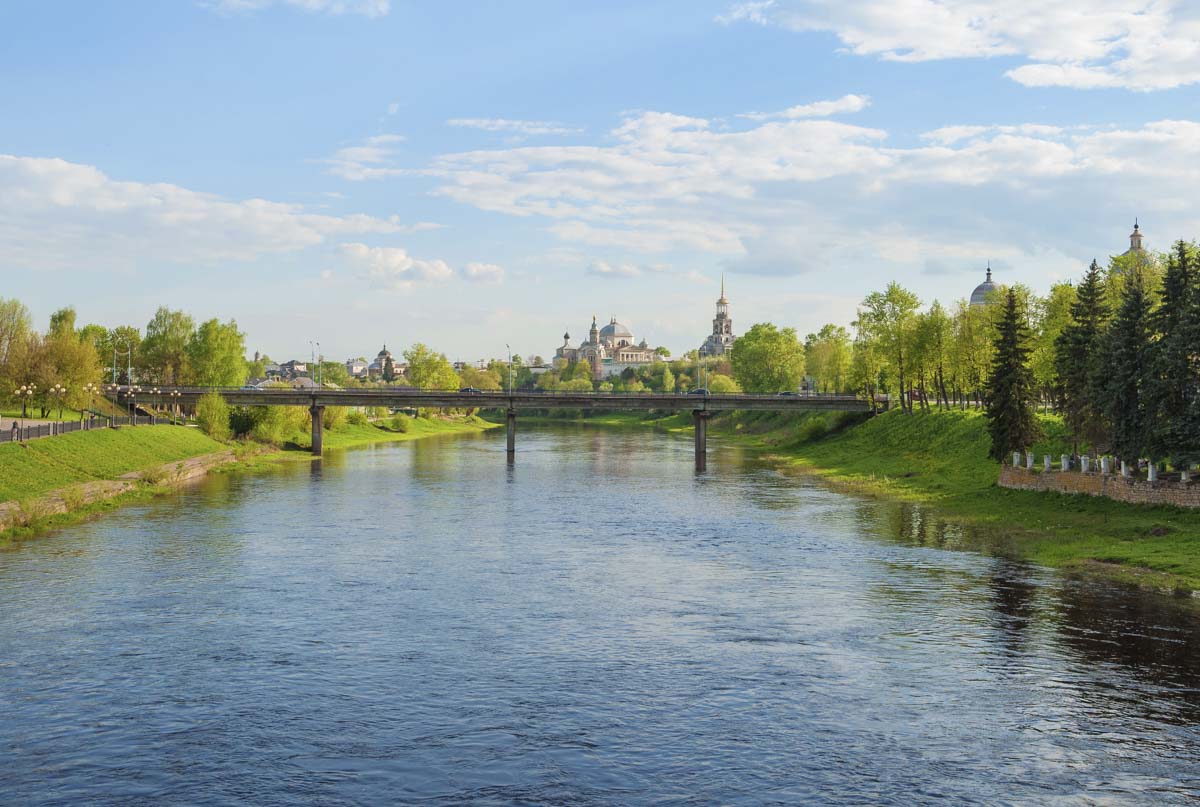 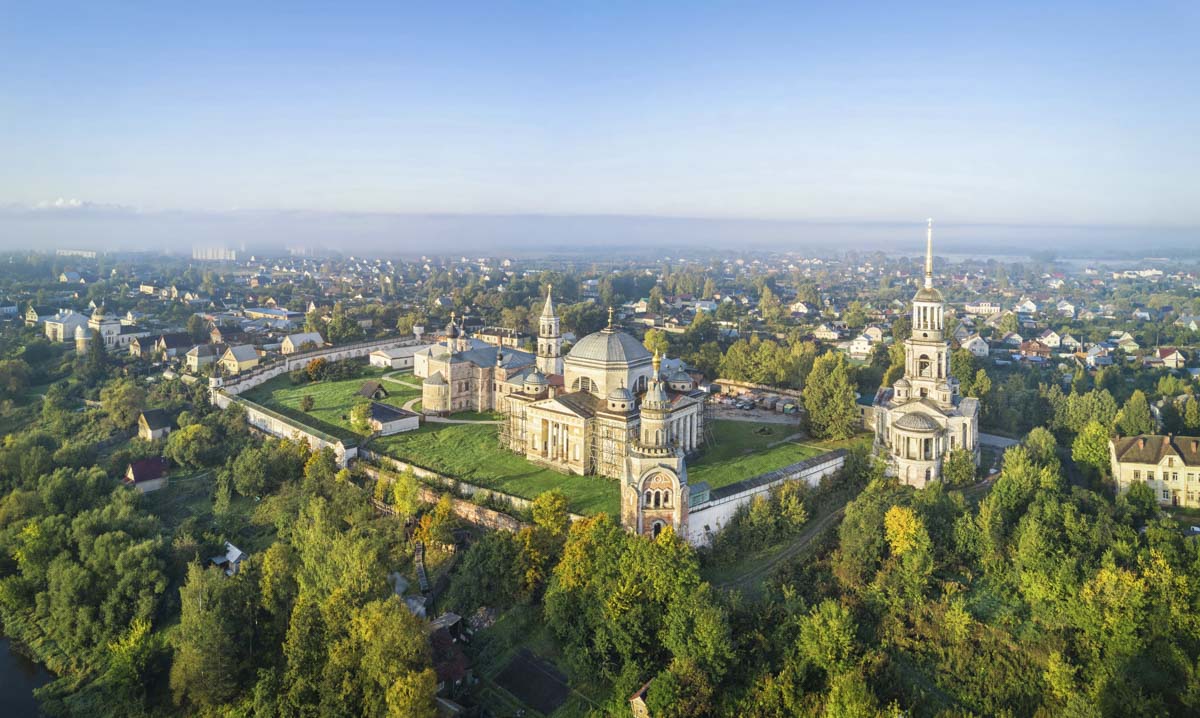 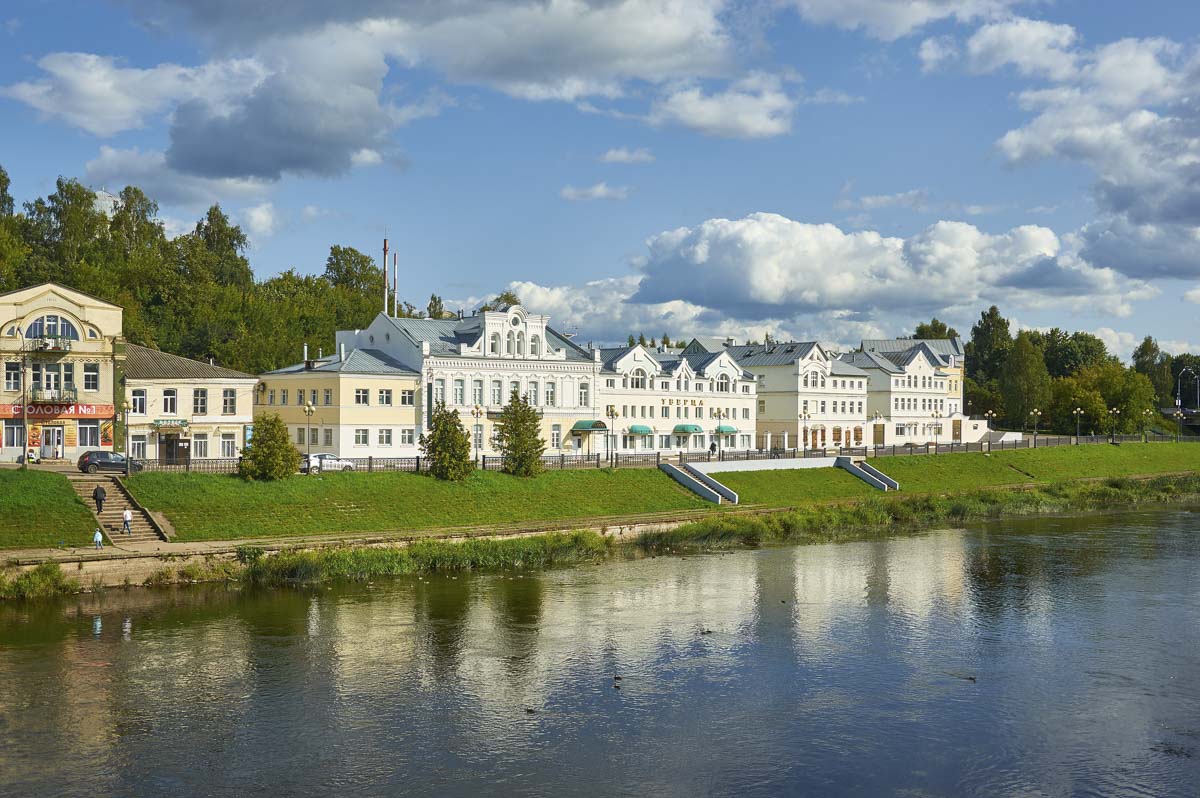 We leave Ostashkov, first cycling along the lake, then through the pine groves. This area gives birth to a major Russian river Volga, the “Mother of all Russian rivers” and the largest of the European waterways. We cycling all the morning amidst dense forest and rare hamlets, and take a transfer to the town on Torzhok.

Transfer to Torzhok by bus. Check-in.

This name means a “marketplace”, and indeed Torzhok is an old trade town. The biggest attraction of Torzhok is the river Tvertsa, a tributary of Volga. Pedestrian bridge gives the best view of the town, with the nice old houses boarding the riverbanks and bell-towers of many churches all around us. 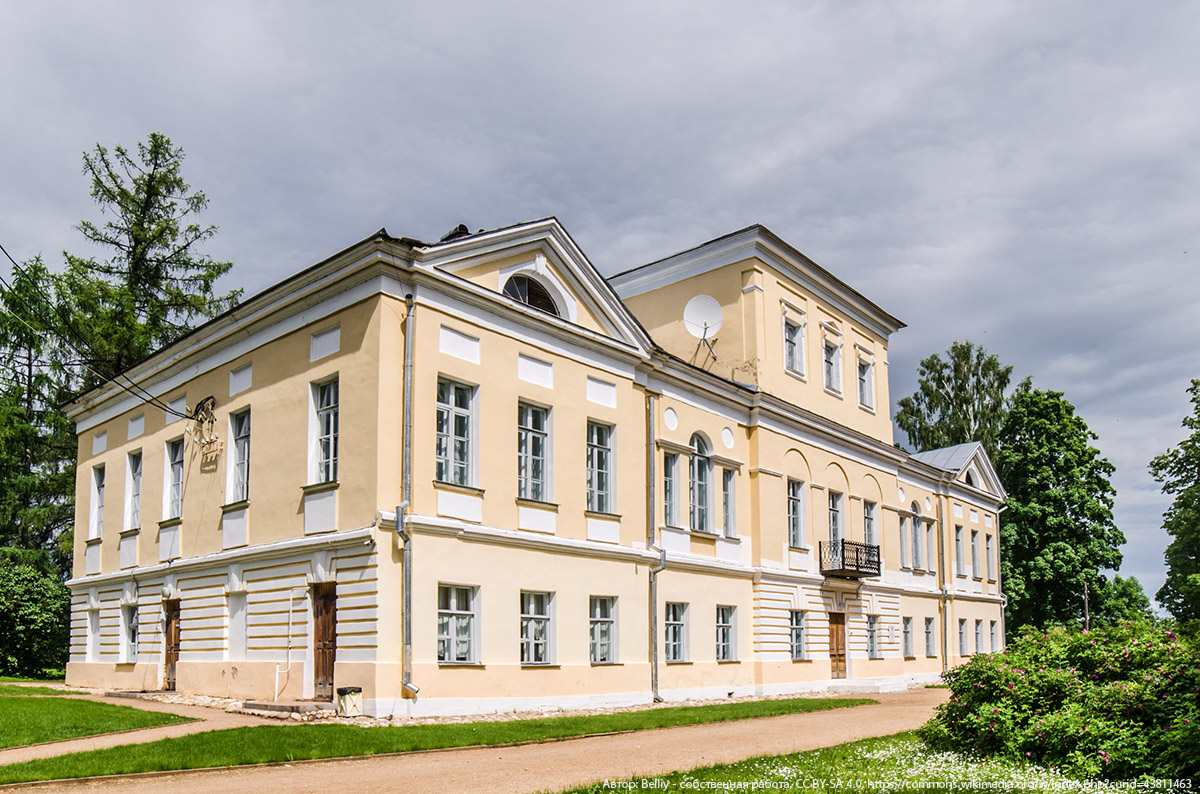 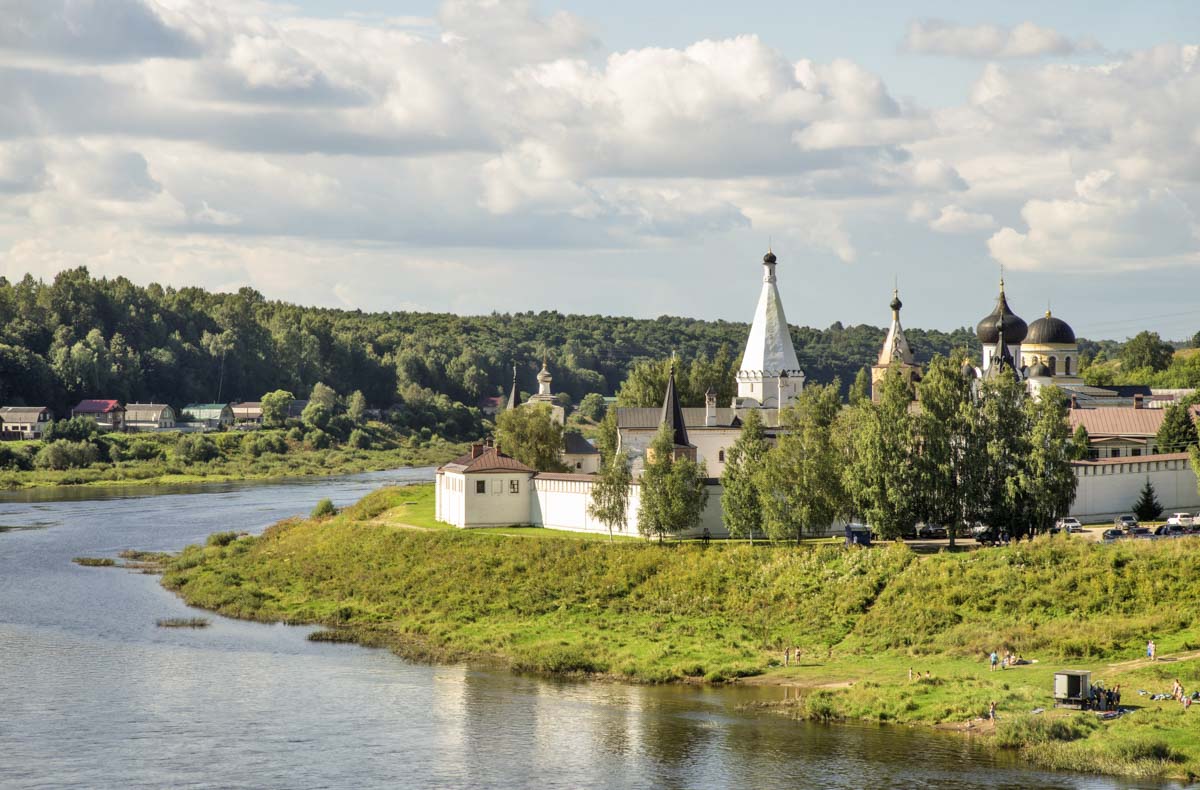 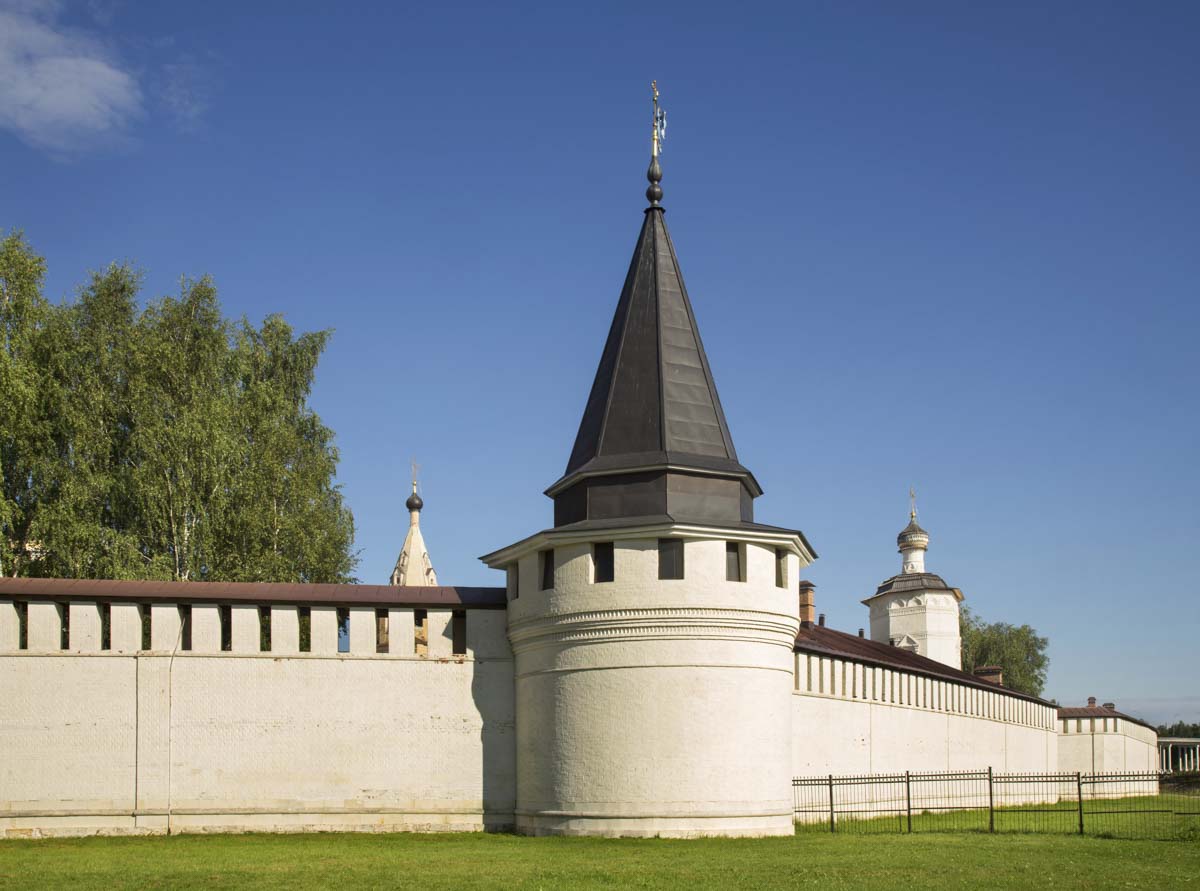 Bike ride from Torzhok (~46 km). Visit to the Pushkin Museum in Bernovo village.

We continue our way through forests, fields, and rural villages. In the village of Bernovo we will stop to see an old country estate with the old park. This estate belonged to the friends of the famous Russian poet Alexander Pushkin. Pushkin was staying here on several occasions, and now the country mansion hosts a museum dedicated to the poet’s life.

Transfer to Staritsa by bus. Check-in.

We end the day in Staritsa, an unspoilt old town with its gorgeous Dormition monastery on the banks of Volga. Staritsa is a quiet, provincial and very cozy city. It seemed to be stuck in time and retained the unique features of past centuries. The city received its name from the Upper and Lower Staritsa rivers flowing into the Volga. For a long time served as a fortress for the Tver princes. A walk along Staritsa will allow us to see the Holy Assumption Monastery, founded in the XII century.

Today’s route lies through pine forests along Volga. More than once we will stop by the river for a swim, or to simply perch upon the steep bank and contemplate the streaming passage of the water of this great river. Before entering Tver, we board our bus for a transfer to Moscow.

Transfer to Moscow by bus.

Transfer with a guide to the airport.